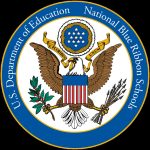 These results are consistent with the grades those schools earned in KPI’s A-F grading system. All four schools earned an overall grade of B and are among the highest achievers in the state. (Holy Rosary is not included because KPI has not yet graded private schools.)

A closer look at some relevant data reveals more insight into the schools. Four of the five schools that received performance awards, Clear Creek, McCarthy, Lakewood, and Holy Rosary, have very few low-income students – no school has more than 7% of the students in any of those schools qualify for free/reduced lunches. However, McCarthy Elementary stands in stark contrast to the others. At the time of their application, 40% of McCarthy students were eligible for free/reduced lunches.

Although McCarthy is recognized as a Blue Ribbon school for overall performance, they also made a significant improvement in closing income-based achievement gaps from 2017 to 2018. The table tells the tale.

Public schools frequently blame poor assessment performance on low-income levels of their students, as if economic status is a precursor to student outcomes. That is simply a myth, and I experienced countless kids in my 17 years in Kansas classrooms where income, one way or the other, had no impact on student achievement. McCarthy Elementary is further evidence similar to my experience. That school shows high achievement among its students, improved assessment scores and reduced income-related achievement gaps are achievable regardless of income level of the students.

Over the last decade, the education establishment has embraced being data-driven in focusing on improving student success. The state assessment results are an example of data that measures how well students are doing. Results from the 2019 state assessments were just released last week by KSDE. Those scores will reveal which schools across the state are on a similar achievement trajectory as McCarthy Elementary in Hays, and which ones continue to lag.