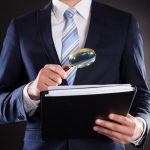 The state’s largest Kansas teacher union, KNEA, is distorting a statement in the new cost study to deceive teachers on school efficiency; they want teachers to believe school boards and administrators aren’t wasting money.  Teachers who’ve been using their own money to buy classroom supplies routinely witness money being wasted.  District representatives and lobbyists have testified in legislative hearings that school boards want to spend more than necessary sometimes for reasons unrelated to improving student achievement.  And there are 286 separate administrative systems with lots of duplication across Kansas for goodness sake.

To be clear, the cost study is NOT saying districts couldn’t save money.  The definition of ‘efficient’ as used in the cost study is found on page 18.  “Efficiency refers to cost-effectiveness: achieving the desired outcomes while minimizing resources used.”  That has nothing to do with whether school administrators could produce the same results at lower costs; instead, it’s a measure of unit cost and that’s not how most people think of school efficiency.

producing the same product as shown in the adjacent table.  Factory A produces 100 computers at a total cost of $80,000 and Factory B spends $82,500 to produce 110 computers.  Factory B is considered more efficient because its unit cost is $750, whereas Factory A spent $800 to produce each computer.  But Factory C was even more efficient, with a unit cost of just $740. 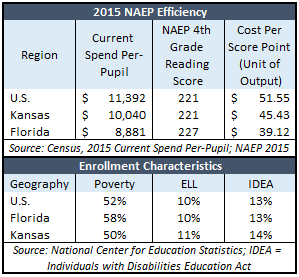 Florida students did even better, with a score of 227; and with per-pupil spending at just $8,881 they were even more efficient, spending just $39.12 per point scored.  Florida outperformed the nation even though it has a much higher poverty level and the same levels of English Language Learners and Special Education students.

So yes, using the definition of efficiency in the cost study, Kansas is considerably more efficient than the national average while still wasting a lot of money with 286 administrative bureaucracies, etc..  But Florida is just one example of how the same or better results can be produced at lower costs.

By the way, if you’re wondering how Florida operates at lower costs, consider this:  Florida has 2.7 million students and just 67 school districts, whereas Kansas has 286 districts for about 490,000 students.  Florida has more than five times Kansas’ enrollment but Kansas has four times more the number of school districts – and KNEA wants teachers to believe that Kansas schools couldn’t possibly produce the same results, save money and pay them better.

The efficient use of taxpayer money, which Kansas Policy Institute defines as ‘getting the same or better quality service at the best possible price,’ is the key to keeping taxes low and our definition is well-known in Topeka.  And even though Mark Desetti, the author of the KNEA newsletter, has often been in the room when I shared that definition with legislators, he also deceived teachers by saying, “Conservatives have for years been swayed by the rhetoric of Dave Trabert and the Kansas Policy Institute. In fact, if the state had a dollar for every time Trabert said “money doesn’t matter” or “schools are terribly inefficient,” there might have been enough money in the treasury to pay for this study.”

Mr. Desetti also knows I’ve never said ‘money doesn’t matter.’  In fact, my typical quote is “Of course money matters, but it’s how money is spent that makes a difference, not how much.”

So be on the lookout for people claiming that Kansas schools couldn’t operate more efficiently.  Some of them might not know better because they should be able to trust those in authority, but the education lobby and school administrators know full well that the new cost study is NOT saying schools couldn’t save money and produce the same results.