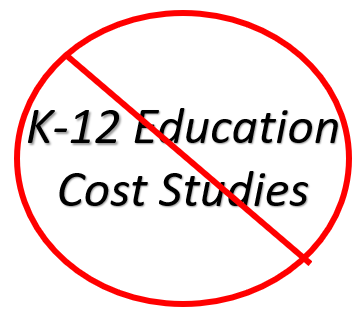 The legislature shall make suitable provision for finance of the educational interests of the state.

As part of the newest wrinkle in the never-ending Gannon saga – yet another education cost study – a peer review of the cost-study process was included in the$285,000 package. The consultant for that review, Dr. Jesse Levin, presented the Legislature his findings of the two most recent cost-studies, the Augenblick & Myers (A&M) study from 2002 and the one performed by Legislative Post Audit (LPA) in 2006. Although Dr. Levin did a thorough analysis of those studies, the exercise serves as a testament to the reality that doing any iteration of an education study is a fool’s errand that will not lead to better student achievements and outcomes. Levin’s review precedes the full report that is scheduled to be unveiled at a joint House/Senate committee this week.

Soon after receiving the results of the new cost study, the Legislature will digest, synthesize, debate, and turn the results and findings of the study into bill form, one that most certainly be scrutinized by all political spectra ad nauseum.

Here’s why education cost studies, especially those in Kansas, have no fundamental value.  Inherent in the process of doing such a study is the idea that there is (1) a “right answer” to what constitutes “educational interests” and (2) a correct way (or ways) to create a funding mechanism to make “suitable provision” to that end. The reality is that there is no right answer. How can there be one when “suitable provision” has never been defined?

In Dr. Levin’s review of the A&M and LPA studies he placed the different models that were identified to serve as the basis for determining a funding level into two categories, input and output. The input model, as the name implies, bases funding on the costs involved in providing education (e.g., teacher salaries and benefits, building costs, transportation, administration, etc.). Dollar amounts on those inputs to determine an appropriate provision of funding are calculated. Conversely, funding for the output (outcome) model is a function of what it costs to achieve certain student outcomes (e.g., test scores, graduation rates).

The problem with using either of those approaches is that there is no definition of what either “suitable provision” and “educational interests” mean. One need look no farther than what the Legislature considers suitable and what the courts consider suitable.

The Kansas Legislature has never defined what those terms mean, but has funded education as a part of their larger charge of funding all of state government. The exception to this is when the Court ordered an excess of $850 million during the Montoy case in the early 2000s.

On the other hand, the Supreme Court, the body that clearly established itself as having the upper hand in deciding this on-going debate, has taken a chameleon approach to what they define as suitable. In Gannon I the Court opined that suitable was defined in terms of achieving Rose standards, a pivot from basing suitable on a volume of money as they did in Montoy.  In striking down the new 2017 finance law, the Court reverted to its Montoy days and once again used money as the litmus test for determining suitability.

In determining that student outcomes are somehow tied to levels of funding, the Court has made a critical assumptive error, exposing their fundamental lack of understanding of the two. The justices fail to recognize that there is no credible evidence of a causal relationship between spending and outcomes. KPI has written about this frequently including here and here.

Given that reality, how do you undertake a credible cost-study (with peer review) trying to tie “suitable provision” and “educational interests” together? The answer is: You can’t.

After hearing that the Legislature was going to commission another cost study, I asked a professional acquaintance (a non-Kansan) who is an expert in education finance if he had any advice to give the Legislature. His response was “they shouldn’t do this study at all.”

How can there be a “right answer” when there is no definition of what the problem is? Given this inherent shortcoming, different studies come up with a variety of “right answers.”

Even if it were possible to somehow come up with the “right answer” to this question, there is a critical factor overlooked in the grand scheme. Whatever additional money is recommended and ultimately appropriated by the Legislature (and there will most certainly be more money this time), there is absolutely no guarantee that the school districts will spend it on those student outcome factors determined in the cost study.

This is the Kansas reality: school districts have virtual carte blanche when it comes to spending. What has happened this school year is evidence of that. The $195,000,000 increase approved by the Legislature in the 2017 session for the 2017-18 school year, which was struck down by the Court in September, was largely targeted to at-risk students, those identified by the Court as “harder to educate.” But how have the school districts chosen to spend the money? Are they targeting the additional money to those students? No. As KPI showed here, the districts are giving pay raises to existing teachers. Now as a former teacher, I have no problem with teachers getting more money, but the point is that this is evidence the districts have the authority to completely disregard the intent of the funding and spend it as they please.

This brings the issue full circle. What is the point of a study that attempts to address “suitable provision” of “educational interests” in terms of funding, when money appropriated for those purposes is spent differently?

Indeed, they shouldn’t have done this study at all.

Stay tuned, KPI will be providing an analysis of Dr. Taylor’s findings when the report is released.