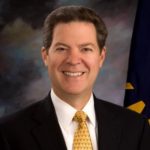 2018 State of the State Fails Students

In his 2018 State of the State address, Governor Brownback said Kansas cannot go down “…the primrose path of thinking that educational results can be forced by massive infusions of taxpayer money alone.”  And then he proposed doing exactly what he correctly said won’t work – giving local school boards $600 million more over five years with no strings attached.

He offered no explanation for his $600 million gift of taxpayer money, but that happens to be the minimum ransom demanded by the Kansas Supreme Court to keep schools open.  The court made a point of saying the $293 million extra provided by the Legislature couldn’t be enough because the State Board of Education wants $893 million more – based on a cost study with deliberately-inflated numbers underpinning the Montoy ransom case.

The governor suggested using the money to raise teacher pay and hire more counselors and psychologists, but school boards could have

done all that with the record-setting funding they already get.  In fact, school boards gave more than double the increase to superintendents and principals than to teachers since 2009.  Average teacher pay and benefits increased 5 percent but superintendent and principal compensation went up by 11 percent and 12 percent, respectively. 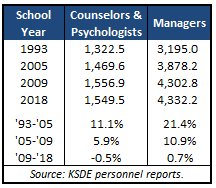 Simply spending more money on education never has – and never will – cause achievement to improve.  Hopefully, the Legislature will reject his 2018 State of the State proposal and start holding schools accountable for improving outcomes and making more effective use of record-setting funding already provided.  In other words, take action that will actually help students and teachers instead of bowing to the school bureaucracy.