Education is still (for now) not a fundamental right under the U.S. Constitution 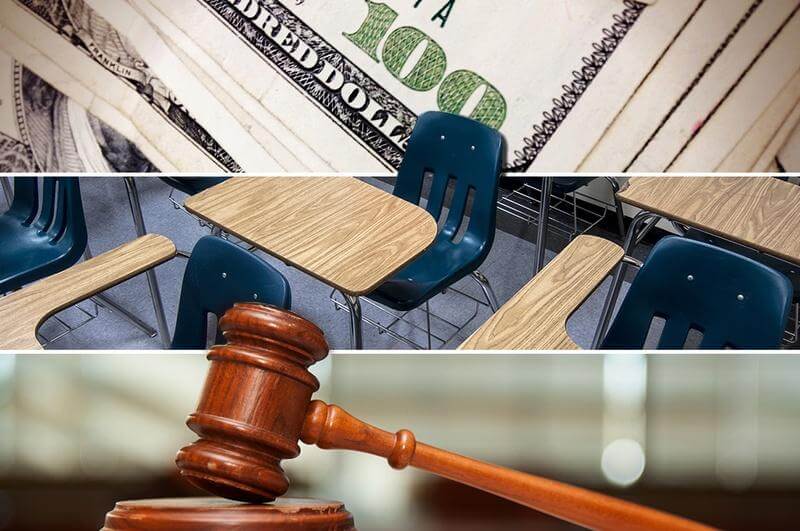 The disposition of a noteworthy education-related court case has gone virtually unnoticed in the fog of the pandemic. In Gary B. v Snyder, a case concerning Detroit Public Schools (DPS), the question of whether education is a constitutional right, protected under the Fourteenth Amendment, was once again put to the test. Fortunately, through a convoluted series of court decisions and legislative action, the answer is still no – there is no federally protected constitutional right to education, at least for now. However, as decisions played out in Gary B., that lawsuit is a cautionary tale that could lead to a change in the federal role in education, including here in Kansas, based potentially on the interpretation of a single judge.

There is not a single mention of education in the U.S. Constitution. The establishment of education is one of the powers reserved to the states under the Tenth Amendment. Education is not a constitutionally protected right. That is an assertion made by the U.S. Supreme Court every time it has been challenged. The lineage begins with San Antonio Independent School District v. Rodriguez in 1973. The court opined that education “is not among the rights afforded explicit protection under our Federal Constitution.” Three other cases, all in the 1980s, affirmed that interpretation.

A lawsuit filed in 2016 by a group of seven DPS students, in what became the Gary B. case, sought to challenge precedent under the Due Process and Equal Protection clauses of the Fourteenth Amendment. The plaintiffs attended five of Detroit’s lowest-performing schools. The proficiency rates of students in these schools were near zero. In one of the schools, 100% of sixth-graders were non-proficient in both reading and math. The University of Michigan Law School summarized that plaintiffs “documented what it alleged to be pervasive conditions that denied children the opportunity to attain literacy, including lack of books, classrooms without teachers, insufficient desks, buildings plagued by vermin, unsafe facilities, and extreme temperatures.”

What separates the Gary B. case is that the plaintiffs sought redress from the federal court system, not the state. What they were really seeking was additional funding from the state to improve educational conditions including more money for full-time teachers, curriculum materials and building conditions.

That these students were subjected to such deplorable conditions is patently unacceptable, but not surprising in the Detroit system. Corruption has been rampant in the DPS system for decades. The state took control of DPS two decades ago, but that didn’t solve the problems. While the plaintiffs were warehoused in squalor getting no education, several principals were taking millions in kickbacks. Ultimately, a dozen were convicted on kickback schemes.

Court decisions and the suit settlement.

Two years after the suit was filed, a Federal District Court judge granted the defendant’s motion to dismiss the case. Judge Stephen Murphy agreed with the state that the Due Process clause of the Fourteenth Amendment “does not require a state to provide access to minimally adequate education.” The plaintiffs immediately appealed to the Sixth Circuit Court of Appeals.

In what could have paved the way for epic changes in public education, the Sixth Circuit ignored Supreme Court precedent and ruled in favor of the students. In April of this year, a Court panel declared, in a 2-1 decision, that the Due Process clause of the U.S. Constitution can be applied to ensure students get at least a basic minimum education. Specifically, the majority opinion states: “In these days, it is doubtful that any child may reasonably be expected to succeed in life if he is denied the opportunity of an education.” This decision, in the parlance of our times, is a game-changer.

Simultaneously, while the appeals process was progressing, the State of Michigan was working out a monetary solution to the suit. A month after the Appeals Court decision, Governor Gretchen Whitmer* and the plaintiffs signed an agreement that settled the case. Basically, the state agreed to increase aid to DPS by $100 million. The individual plaintiffs also received a cash settlement to further their educations. Ultimately, the Fourteenth Amendment was used as a tool to get what all education lawsuits are about: more money.

The potential bombshell decision by an Appeals Court panel did not go unnoticed by the full 16-member Appeals Court. Because of the potential impact and the reversal of Supreme Court precedent, the full Circuit Court of Appeals voted to rehear the case. The full Court vacated the 2-1 decision. Ultimately, having won additional money from the state, the plaintiffs moved to dismiss the case. On June 11 the Circuit Court of Appeals granted the dismissal.

Judge Eric Murphy’s 24-page dissent from the majority opinion in the three-judge panel decision is full of supporting precedent – and reason – as to why the U.S. Constitution does not protect a right to education. He immediately cites Rodriguez in which the Supreme Court was clear that education “is not among the rights afforded explicit protection under our Federal Constitution.” He is clear in his opinion that “the importance of a service performed by the State does not determine whether it must be regarded as fundamental.”(emphasis added)

Judge Murphy makes a clear distinction between states interfering with fundamental rights and compelling states to provide funds they may need to exercise the rights. That would change if education was subjected to substantive due process pursuant to the Fourteenth Amendment.

Judge Murphy’s opinion can be viewed through the prism of how the Kansas Supreme Court has meddled in education, specifically in the Montoy and Gannon cases. Judge Murphy used the term “jumble” to describe how a right to a federal constitutional minimum education would interfere with the separation of powers. Would the feds “compel the states to raise their taxes to generate the needed funds?…How old may textbooks be before they become constitutionally outdated?…Which HVAC systems must public systems use?”

He could have just as appropriately added what the Kansas Supreme Court has used to overstep their authority in the Montoy and Gannon cases:  conflating money and test scores. It’s unfortunate the Kansas Supreme Court didn’t consider this quote from the Rodriguez case when ordering the Kansas legislature to drastically increase public school funding: “Our judicial commissions give us no special insights into these ‘difficult questions of educational policy.’” Amen to that.

Legally, it’s as if the Appeals Court panel’s initial decision never happened. However, as the University of Michigan’s Law School states, even though the case “does not have precedential value…the language of the opinion still exists for plaintiffs to potentially draw on in the future.”

Does this mean that in the relatively near future the courts could change course and find that education is a federal constitutional right? Time will tell. It’s entirely within the scope of reason that there will be a slew of post-COVID-19 lawsuits if there is a lingering financial burden on states and localities, those entities that actually foot the bill for the vast majority of public education.

If it is found that a basic education is protected under an interpretation of the Fourteenth Amendment, that would open the floodgates to federal intervention in public education. You thought Common Core was bad? How about a nationwide uniform curriculum in, say, for example, American History? That’s not hard to imagine. You can bet if there is an administration friendly to teachers’ unions, like the NEA and AFT, school choice would be in the crosshairs. This is why Gary B. is so significant. It serves as a reminder of just how close we could be to a federalized education system.