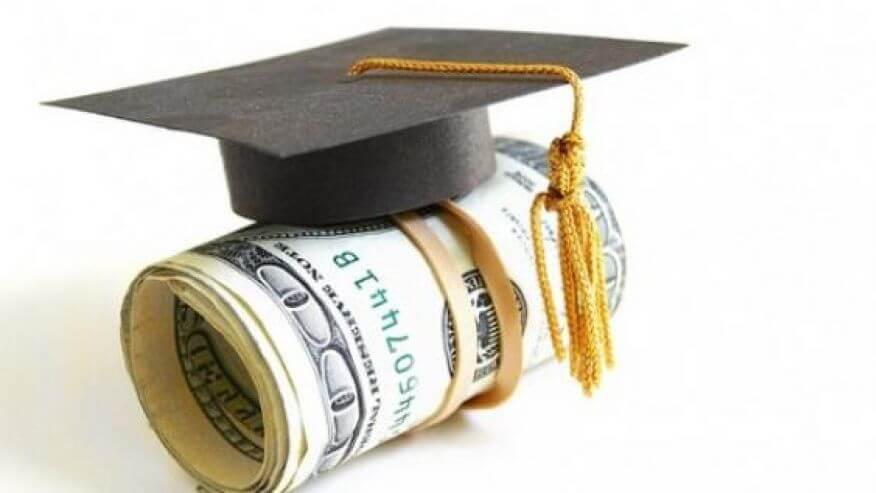 A Kansas student entering KU in the fall of 2001 had tuition and fee costs of $1,442, according to the Kansas Board of Regents. A decade later, the cost of admission leapt to $4,013. That’s a 179% increase, more than 6 times the rate of inflation for that period. Even the least expensive Fort Hays State raised tuition and fees at a rate thrice that of inflation in that decade.

Why pick that time frame? If you read the Kansas Action for Children’s (KAC) latest “report” entitled “The Cost of Admission: Higher Education in Kansas” you’d get it. Under the authorless nom de plume of Kansas Center for Economic Growth[1], KAC employed their typical substandard research and reporting methods to blame the Legislature’s “failed tax policy” since 2012 on a sudden and counterproductive financial burden placed upon students attending Kansas colleges and universities.

Specifically, they complain that “after years of declining state investment in higher education due to failed tax policy, Kansas college students incur higher debt and reduced economic prospects.” They support that contention with a predictable diatribe that everything would be fine if the Legislature would just raise taxes. You get the logic – if we raise taxes, students would have more money to go to college and get a good job in a business that would be thriving because of their higher tax burden to the state. It’s connect-the-dots KAC style.

The graph below shows just how much our public institutions of higher ed have been gouging students and families at the state’s six regents universities going back to 2003. 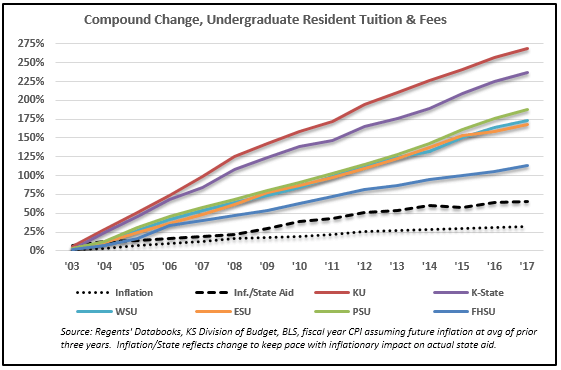 The KAC “report” fails to mention that it’s the Board of Regents who set the costs and allocate money to the universities – not the Legislature. As we revealed in this blog from earlier this year, the 2016-17 regents’ directed tuition hikes were unnecessary because their claim of budget cuts was bogus and they had over $85 million bankrolled in reserve.

So why doesn’t KAC point an accusatory finger at the source of the escalation in the cost of a higher education? Where was the outrage at the Board of Regents years ago when they were taking advantage of Kansas students by raising costs simply because they knew they could get away with it?

But you see, without realizing it, KAC is actually partially correct in their analysis. Government policy is the real culprit in this scenario. But it’s not policy originated from the state capital, it’s the federal government’s policy of guaranteeing loans so students and families can borrow, borrow, borrow in order to go to college. And it doesn’t take a doctorate in economics to realize that when money is easy to get, the colleges and universities will gladly take it. This is a not a phenomenon unique to Kansas. Exorbitant university costs and a debt-ridden college educated population are a nationwide problem. Research like this from U.S. News  and this from Forbes point to government backed loans as the reason for the skyrocketing price tag on a college diploma.

We’re not disputing that the post-college debt burden continues to rise to unacceptable levels each year. But the picture they paint is incomplete and the blame is placed in the wrong chamber. KAC, if you want to blame government for the college cost, fine. Just blame the right ones – the feds and the Board of Regents. Don’t blame the Kansas Legislature. The impact of state “failed tax policy” on Kansas higher education costs is as non-existent as the Kansas Center for Economic Growth itself.

[1] This article in the Wichita Liberty revealed that Kansas Center for Economic Growth is merely a side project of Kansas Action for Children and not an independent organization as they claim to be.