Looking ahead to the next school year 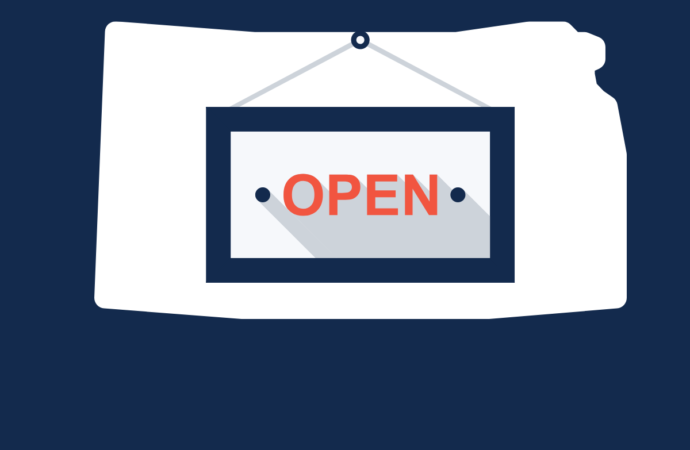 As we rapidly approach what would have been the end of the school year, our attention is naturally drawn to what to expect come August. Will schools open as typically scheduled? Will the opening of the 2020-21 school year be delayed into September or beyond? Will health concerns drive a different approach to the way schools are structured and managed? What will the financial impact of a lingering recession have on public education?

No one has a crystal ball that could accurately address these unknowns, but given the trajectory of the severity of COVID-19 and the pressure cooker-type restlessness of the citizenry to “reopen” the economy, a reasonable picture of what will likely happen is beginning to coalesce.

Simply put, the most likely scenario is that schools across Kansas will open this August pretty much like they did last August. It is also possible that strictly as a precautionary measure, districts might choose to wait until after Labor Day and push the end of the school year into early June, as many states in the east already do.

Why so optimistic? The combination of COVID-19 health impacts, financial impacts and societal impacts point to a near-normal return to the matter of education by the fall. Plus, the data – at this time – simply doesn’t support continuing a statewide shutdown into the next school year. In a world of political division, one approach seems universal among politicians and policymakers. Everyone claims to be “data driven.” The questions remain: Which data? Who ultimately makes the decisions?

The following table summarizes both COVID-19 cases and deaths in Kansas as of May 15  as reported by the Centers for Disease Control. Of the 105 counties in Kansas, 83 have either zero reported cases or fewer than 20. Eighty-six counties have reported zero deaths. Only three counties – Wyandotte (67), Johnson (54) and Sedgwick (20), which equal 141 of the state’s 164 COVID-19 related deaths – have experienced 20 or more deaths.  Those 86 counties absent COVID-19 fatalities are home to 209 of the state’s 286 unified school districts. Only 20 school districts reside in the three hardest hit counties. If these trends continue, it’s hard to justify a statewide closure of schools. 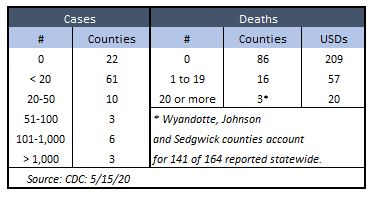 Furthermore, as the economy begins to recover parents will be returning to their jobs. This alone will create immense pressure on the state to give schools the green light. Plus, the health-related data has shown that school-age people have a much lower health risk from the virus. That’s a hard fact to ignore. Even most teachers, aides, and other staff members are in low-risk age groups. As the prevalence of testing, treatment, and – hopefully sooner than later – a vaccine becomes widespread, those in higher risk groups who may be in the employ of a school will become less vulnerable.

An unforeseen consequence of schooling at home for this two-month period is that it might drive up demand for distance learning. If that comes to pass, it’s possible that those teachers and other staff in the higher-risk categories could fill that demand by teaching from home.

In terms of funding for schools, rest assured, the money to reopen will be there despite the grim economic realities of state and local government revenues. Even though it seems inevitable that state support to K-12 education will decrease, federal dollars will likely fill in the gaps.

I was a public-school teacher in Kansas during what has been called the Great Recession a decade ago. Despite the economic hardship experienced in almost every sector of the economy, there was virtually no impact on public education, at least in Kansas. Despite millions of Americans thrown out of work at that time, I never felt my job was in jeopardy.  Nor was there a shortage of resources in my school to educate the students.

There will undoubtedly be some changes. Don’t look for social distancing and the donning of masks, however. Those two COVID-19 phenomena simply aren’t realistic in a public-school setting. After the Sandy Hook shooting  in 2012, schools across the nation turned attention to securing buildings and implementing lock-down procedures. Look for a COVID-19 version to be part of school landscapes, with special attention given to what has been stressed since the outbreak – e.g.,  personal hygiene, facility cleanliness, staying home when sick   – at least in the near term.

The country is cautiously beginning the process of recovering from the pandemic. Businesses are beginning to reopen, some folks are able to return their jobs, and people are venturing outside the home. The reopening of public schools will be a major milestone on the road to normalcy.