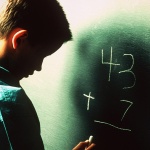 Senate Ways & Means held a hearing this week on SB 71, which, as explained in a previous blog post, would correct some inequities in the distribution of Supplemental General State Aid (SGSA) / equalization funding and reduce the amount to be provided this year so that it approximates the amount promised by the Legislature last May. The reduction is intended to offset a $36 million increase caused by districts increasing their budget authority. There is no need, however, for such an increase; it’s just about entitlement.

Opponents of SB 71 included a mix of school district personnel, the Kansas Association of School Boards, Kansas PTA and other groups. The entitlement theme was very prevalent in their testimony; some opponents would not acknowledge that schools were getting a lot more equalization money than last year as well as the approximate dollar amount promised in May. Opponents portrayed the reduction in the amount of their increased equalization as ‘significant’ and other ominous terms.

USD 501 Topeka Superintendent Julie Ford spoke of the “devastating impact” that would be inflicted on her district. Here is the reality of that ‘devastation.’ USD 501 would receive a $3.8 million increase in equalization funding over last year under SB 71 but $897,000 less than what they want. An $897,000 reduction is 0.5% of their $190 million operating budget, which would still be 11.2% higher than actual spending last year. USD 501 would only have to adjust remaining operating costs by 1.5% over the next four months to absorb the ‘budget reduction’ – and still have an 11.2% increase for the year. 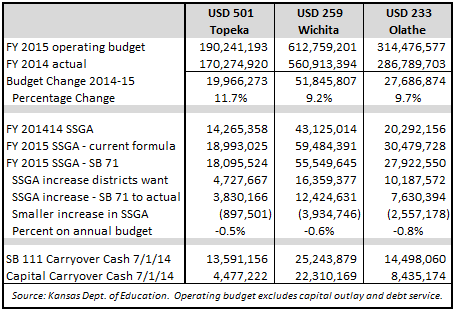 Alternatively, the district could take the $897,000 out of the $13.6 million in carryover cash balances in operating funds (SB 111 funds are a dozen funds from which districts can pull cash for any use) or use some of their capital cash reserves for maintenance projects.

Districts have multiple options at their disposal to adjust to the approximate funding they were promised for this year, but predictably, legislators were warned that student services would be cut. Options to use cash reserves, operate more efficiently, reduce administration or other non-student functions were eschewed and students are put on the firing line. That’s another indication of entitlement.

You can see the facts for each district by downloading this spreadsheet.d124692.aspx_
Column 6 lists the amount of money raised by a 1 mill tax in each district. (Districts that are ineligible for equalization because they are considered ‘property-rich’ even though 1 mill raises less $50,000 are highlighted in yellow.)

Column 11 compares SB 71 distributions to actual amounts from last year ($106 million increase). The nominal impact of SB 71 compared to what districts want is shown in Column 12 and the difference between SB 71 and the amount legislators budgeted for this year is in Column 13.