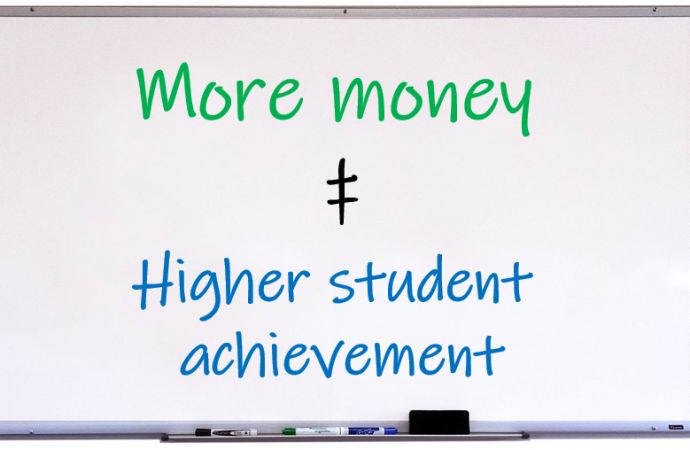 Now that the 2018 state assessment scores have finally been released by KSDE, this statement by the Kansas Supreme Court can be, pardon the expression, put to the test. That is because K-12 spending in the 2017-18 school year increased by more than $400 million, a 6.7% increase, to $13,620 per pupil. Despite the spike in spending which was authorized by the Legislature in response to the on-going Gannon case, both groups identified by the Court – the “approximately one-fourth” and the “harder-to-educate” actually performed worse in 2018.

It’s important to review what the Court considers “substantial competent evidence” and how that has formulated their opinions throughout the Gannon case. Here’s how they connected the dots:

->In the Shawnee County District Court in 2014, the plaintiffs provided exhibits that showed student achievement on No Child Left Behind (NCLB) assessments increased with the influx of court-ordered money pursuant to the Montoy

->During that same trial, then Kansas City (USD 500) superintendent Cynthia Lane testified that additional money through a federal grant caused test scores to increase at USD 500’s Emerson Elementary. The district court accepted the plaintiff’s exhibits along with Lane’s conflict-of-interest testimony as part of the “substantial competent evidence.”

->From these exhibits and evidence, the district court determined that “yes, money makes a difference,” citing the coincidence of Montoy money and student performance on state assessments. “Student performances/achievements, based on accepted testing methods, evidenced considerable progress, i.e., money was making a difference,” according to the three-justice panel.

->That court also concluded the increase in the percentage of students not proficient in math and/or reading in NCLB testing was due to “funding shortfalls…which have not, by any evidence, ever been even closely restored to that level of funding where consistent progress was firmly evident.”

->At the appellate level, the Supreme Court considered each of these evidences a “finding of fact.”

->This determination was reiterated when the Court struck down the CLASS act – the education funding law that existed from 2014 to 2017 – stating: “we specifically affirmed that the two years CLASS was in existence…the funding was inadequate and that substantial numbers of Kansas students were performing below their grade level.”

The Kansas Legislature has responded by authorizing an additional funding amount to K-12 education in excess of a billion dollars. The first installment of this court-ordered money was spent in 2017-18.

The results of the 2018 state assessments show just how wrong the Supreme Court’s judgment is.

During Gannon oral arguments, the Court settled on identifying those students who have scored in Level 1 on Kansas state assessments – the lowest level – as those who are not being provided basic math and reading skills. What was the impact with additional court-ordered funding? That group got bigger. In math, the percentage of students statewide who performed in Level 1 increased from 27.8% to 29.2%. In English language arts (ELA), that percentage increased to 29.2% from 27.4% in 2017. For high school students, a group that has traditionally scored lower overall, the Level 1 ELA percentages increased from 31.2% to 33.3%, while the Level 1 math percentages increased from 42.3% to 44.5%.

The changes in this category are even more stark and show these subgroups, despite all the extra money to schools, are being left even farther behind. Specifically:

Of particular interest is the high school subgroup, because these students are getting close to graduating and either continuing their post-secondary studies or entering the work world. Their performance is lower than overall scores and getting worse.

The two graphs provide a visual representation of the failure of more money to increase test scores, just the opposite of what the Kansas Supreme Court has determined. 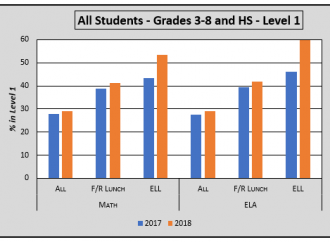 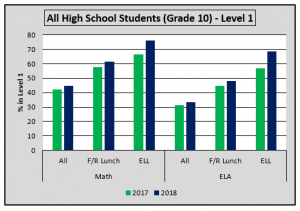 Clearly the Court has gotten it wrong. No longer is this an academic debate. The results are in, and the results don’t lie. There was considerable increase in K-12 education spending followed by a decrease in state assessment scores.

Unfortunately, much higher spending has already kicked-in for the 2018-19 school year and will continue for at least the next several years. KSDE estimates per-pupil spending will be $14,116 when the ink dries from the 2018-19 school year. Even more disturbing is that the Court has determined the additional billion dollars the Legislature has committed in the past two sessions is not enough and the new Legislature will consider adding as much as $364 million to the pot during the next session.

Is it any wonder the state assessment results were released absent any fanfare? They were not available to the public until November 13. There was no accompanying press release from KSDE and not even a perfunctory presentation of the data at a state board meeting. An internet search showed zero news articles, newspaper or other media, that presented state assessment results. One can only speculate how those results would have been treated if scores had increased or they were not tied to spending in the on-going Gannon case.

Oral arguments pursuant to a Gannon VII decision will be made in the spring. One wonders how plaintiff attorney Alan Rupe is going to try to spin this revelation. Finally, the state will have some evidence to counter the false premise of the court. It’s incumbent on the state solicitor to bring this data to the attention of the justices.