At a time when many school districts are issuing misleading statements about school funding to parents, teachers and legislators, recent claims by USD 500 Kansas City set a new transparency low.  A story in the Kansas City Star outlined the district’s plans to reduce spending, which  Superintendent Cynthia Lane blamed on “…years of low state funding, rising costs and the loss this year of $2 million in state money because of a new block grant funding measure….”

Citizens are also dealing with rising costs, and school districts would like to inflict even higher costs on them – more taxes – to fund districts’ financial desires.  ‘Years of low state funding’ is a matter of opinion but data from the Kansas Department of Education and the Kansas Division of the Budget show that state funding and total funding of schools are setting new records this year. 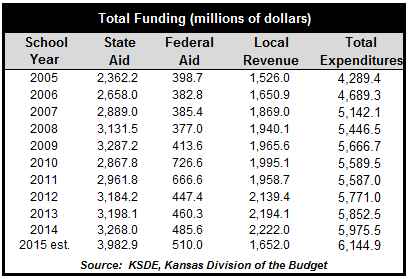 Part of the 2015 increase in state aid ($522 million according to block grant files prepared by KSDE) is money that had been inappropriately recorded as Local aid in prior years (20 mills mandated by the Legislature for all districts) but State aid is still at an all-time high with that adjustment.  Total taxpayer support of public education will also set a new record this year.

Contrary to Supt. Lane’s implication, however, USD 500 is not getting $2 million less in state aid with the block grant, it is gaining $12.8 million in state aid this year without counting any increases for KPERS, Bond & Interest or Special Education.  What she is really saying – but doesn’t want you to know – is that she wanted an even larger increase and says the district is being ‘cut’ because it didn’t get as much of an increase as it desired.

That is just the beginning of the district’s conscious efforts to mislead parents, teachers and legislators.  “We have cut more than $50 million,” Lane said. “There is no longer any fat left. … I frankly think there is very little left to cut that doesn’t dramatically impact what we do for our kids.”

The district has definitely not reduced spending by more than $50 million as implied by Supt. Lane.  They may have budgeted for and spent less than they would like (which is what Supt. Lane is really saying) but they most certainly have not cut spending recently (as she wants you to think).  This comparison of the district’s budget and actual spending over the last ten years shows that spending less than the amount budgeted is rather common but doesn’t necessarily mean that spending was actually reduced; most often, it means that their plan to spend more was reduced.  Districts openly admit that they budget more than they plan to spend to avoid having to re-publish a budget… but conveniently forget to mention that fact when claiming that their budget was cut. 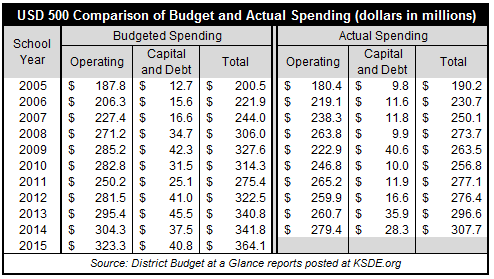 Operating budgets were at record-highs in Kansas City this year and the two previous years; actual spending on current operating costs set records the last two years and likely will do so again this year. 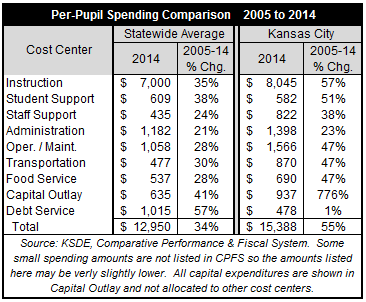 Operating spending increases between 2005 and 2014 in the Kansas City district have been very large across all cost centers; capital spending also jumped but debt service has been stable.  Administration spending ‘only’ increased by 23 percent but it was well above average in 2005 and was the second highest spender among large districts last year (profligate USD 501 Topeka wins that prize at $1,568 per-pupil).  Shawnee Mission, by comparison, spends $942 per-pupil on administration; spending at that level would save $9.4 million in the Kansas City district, which could be spent on Instruction or returned to taxpayers.

Listening to administrators and media reports, one would think the district is suffering from extreme austerity but district financial reports show otherwise.  And these spending comparisons only reflect what has actually been spent.  USD 500 also boosted operating cash reserves by $26.7 million over the period, going from $25.1 million in 2005 to $51.8 million in 2014.  Operating reserves increase when more money is collected than is spent.

“Very little left to cut” is a farce
Supt. Lane may claim that there is very little left to cut but a July 2013 Legislative Post Audit report on the district says differently; page after page lists recommendations to bring district spending in line with market conditions and reduce costs.   One recommendation was “Reduce Custodial and Maintenance Positions and Salaries” since some salaries were found to be more than 20% higher than paid in the private sector and the district had more staff than comparable districts.  The district response is listed in the audit: “The community and staff will resist any reduction in staff or salaries.  The custodians might unionize if staff positions or salaries are reduced.” 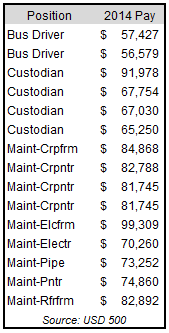 Here is a sampling of maintenance, custodian and bus driver pay taken from an Open Records request of the 2014 school year payroll.  This list reflects the highest paid in these positions and reflects total pay (wages, overtime, bonuses, etc.) but do not include any benefits.  The position titles are shown as provided by the district.

The LPA audit also recommended reducing administrative salaries to market wages through attrition; the district responded by saying “staff would resist any reduction in salaries.”  This table shows pay increases given to the highest paid district employees, all of whom are administrators who mostly received double-digit pay increases over the last two years.

Supt. Lane told the Star “I absolutely believe if you have to cut people, you have got to start at the top.”  She was referring to the dismissal of Edwin Hudson, chief of Human Relations, and “…30 assessment managers hired three years ago to keep track of state assessment scores so teachers and principals could concentrate more on school instruction.”  Loading up on managers to track state assessment scores that are released once per year (except last year when no scores were released because of technical issues) is symptomatic of district hiring practices.
Over the last ten years, USD 500 increased its management staff by 18.8 percent; management is a KPI-defined label that includes superintendents, assistant superintendents, principals, assistant principals, directors, managers, supervisors and instruction specialists.  Maintenance, transportation and food workers jumped by 45.6 percent, teacher aides more than doubled and a variety of employment categories we lumped into All Other shot up by 42.7 percent.  Enrollment, meanwhile, increased by just 7.2 percent. 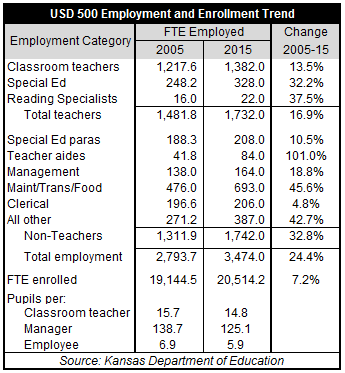 Non-teaching staff jumped by a third and total employment is 24.4 percent higher.  The district has one full time equivalent employee for every 5.9 students.

USD 500 has one manager for every 125 students, which is very inefficient compared to other districts.  Shawnee Mission, for example, had one manager for every 210 students last year and has since reduced its administrative footprint because Superintendent Jim Hinson felt it was too large.  If Kansas City had the same pupil / manager load as Shawnee Mission (before it was reduced), they would have 66 fewer managers…and those costs could be made available for instruction instead of suing citizens for more money. 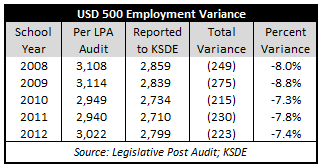 Here’s another example of misleading information from USD 500.  The employee count in the above table comes from official KSDE personnel reports with data provided by each school district.  But USD 500 may have many more employees.  The LPA efficiency audit shows that the district was significantly under-reporting employment to KSDE.  Lest anyone suggest that the KSDE report doesn’t contain categories that capture all of the district’s staff, it should be noted that the Certified Personnel and Non-Certified Personnel reports each have an “Other” category for such purpose.  Consciously and consistently underreporting employment by more than 200 employees fits the district’s pattern of providing misleading information.

The district’s financial position is much different than represented by management, but it should be noted that staff, students and parents are likely experiencing legitimate resource issues.  Frankly, that’s part of a pattern across many school districts, which is intended to gain sympathy and support for higher spending at the expense of others.  USD 259 in Wichita, for example, is telling staff and media that they are suffering a $4.8 million ‘cut’ with the block grants this year when in reality, they plan to spend $87 million more this year.

The Kansas City district even takes misrepresentation into the courtroom.  I was in the courtroom when Supt. Lane testified that lack of funding was the reason that many of the district’s students weren’t adequately prepared for college and career, but she is on record placing the blame elsewhere, months before she made her court appearance.

When the U.S. Department of Education denied a portion of the district’s proposal to raise standards in a requested waiver from the Kansas Approved Accountability Plan from USDOE, Supt. Lane responded by saying, “The Kansas assessment is not rigorous enough to guarantee that our students are on-track with where they need to be. We have asked to raise standards for our students by administering the MAP, which is a more rigorous assessment, and USDOE is telling us ‘No!’”

The district newsletter in which this quote appears makes no mention of funding; the blame for academic issues is placed solely on sub-standard assessment issues.  Supt. Lane may say that funding is also an issue but the point here is that the story routinely is crafted to maximize sympathy for the desired outcome.

That’s a disservice to staff, parents, legislators and most important, to students.