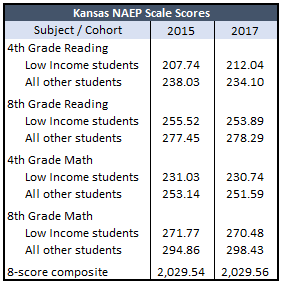 levels remain stubbornly low, especially for low income students.  Low income students, who are identified by Kansas education officials as being eligible for free or reduced lunch, gained considerable ground in 4th Grade Reading; their average score improved from 207.74 to 212.04.  The U.S. Department of Education, which produced the 2017 NAEP results, says a 10-point change on scale scores is the equivalent of a year’s worth of learning, so those students gained about 4 months’ worth of learning.

Low income students lost ground elsewhere, however, as scale scores declined in 8th Grade Reading and in both grade levels for Math.  All other students (those who aren’t considered low income) had a small gain in 8th Grade Reading and a larger gain in 8th Grade Math worth about 3 months of learning.  Scale scores dipped a bit for this student cohort in both 4th Grade subjects.  Taken collectively, an 8-score composite of all students’ scores grew by two hundredths of a point. 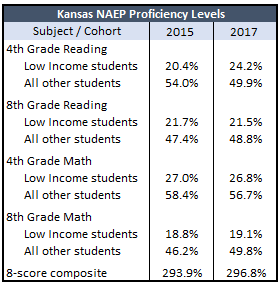 By the way, NAEP is considered the gold standard of measuring student achievement across states, and the Kansas Department of Education says measurement of Kansas’ performance since 2003 is valid and reliable. 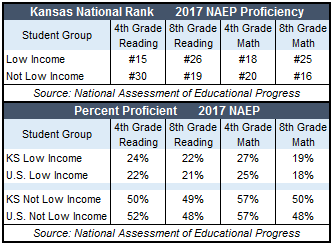 Reading, but the reason Kansas is #15 underscores the misleading nature of rankings; with the national average at just 22 percent proficient, a high national ranking obscures serious academic challenges facing the state and the nation.

The long term trend on composite scale scores for all students (combining low income and all other students) once again demonstrates that large spending increases don’t produce better achievement.  Reading scores were 221 and 268 for 4th Grade and 8th Grade, respectively, in 1998 when Kansas first participated in NAEP; about $2 billion and nearly 20 years later, the scores are 223 and 267.  Kansas’ first Math scores in 2000 of 232 and 283 improved for a few years, peaking at 248 and 290 in 2007 and held relatively steady until 2015 when they dropped to 241 and 284 and remained for 2017.  The Kansas Department of Education told legislators that the transition to Common Core may have accounted for some of the decline in 2015, as many states experienced similar declines. 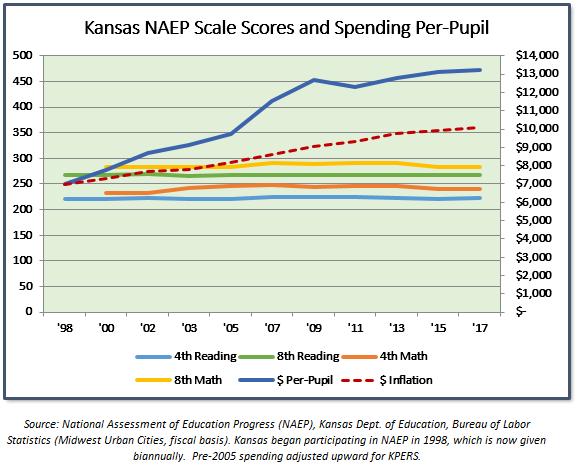