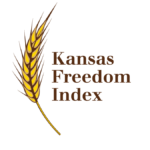 The 2020 legislative session was unique in many ways and our 2020 Kansas Freedom Index adds some new wrinkles as well. Over 70 legislators scored above 86% and one – for the first time ever – had a full-session score of 100%.

The impact of the Freedom Index is evident not just in scores; legislators are asking more questions throughout the session about a given policy proposal and how that might take shape on the Index. 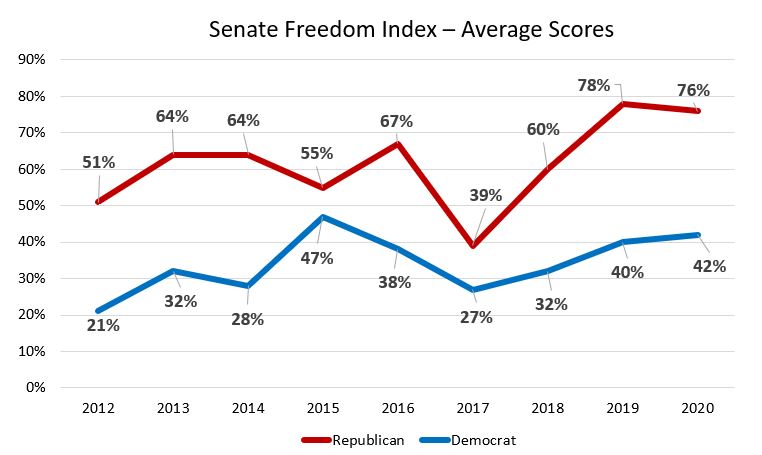 In other news, party ID has little impact on how a legislator votes…the sun also rose in the East this morning. Republicans are spread across the board. Some demonstrated an affinity for freedom, while others voted against freedom more often than they voted for it. The range, amongst Republicans, in the House runs from a high of 100% to the low of 50%, which is considered neutral on the Index…meaning a legislator with a score of 50% voted for freedom as often as they voted against it. Someone with a 100% score would always vote in support of freedom, and 0% reflects the opposite. 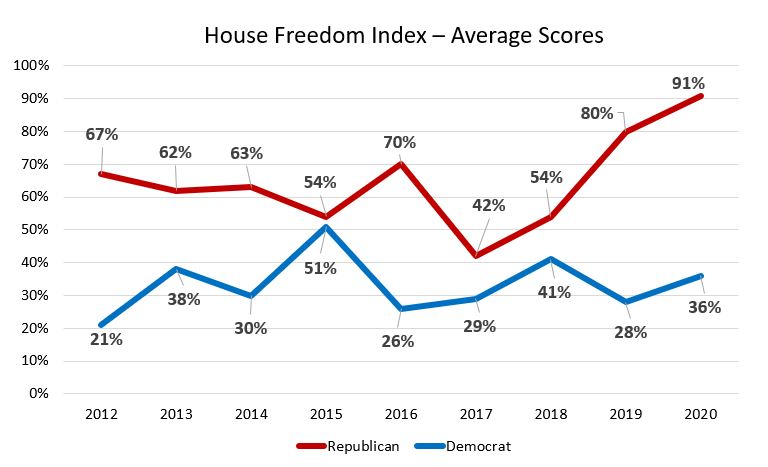 The 2020 Kansas Freedom Index highlights many of the votes from the 2020 legislative session – it also includes the special session – and how those votes bear on educational and economic freedom. This guide is a one-stop-shop for the impact that legislative votes have on your ability to run your business, live your life, and raise your family as you see fit. It is the product of nonpartisan analysis, study, and research and is not intended to directly or indirectly endorse or oppose any candidate for public office.

The Kansas Freedom Index aims to provide insight into the goings-on in Topeka. Anyone who has heard me speak about the legislature knows my routine – our federal system has been turned on its head as coverage from DC dominates political/policy coverage and very little is discussed in Topeka. The KFI, plus The Sentinel and other KPI publications, aim to rectify this trend. Traditional media newsrooms are under new pressures but we cannot allow coverage of state and local issues to lessen. It is very likely that the votes taken in Topeka will have move direct impact on the lives of Kansans than nearly anything that emanates from the White House or Congress.

One additional clarifying thought – some votes are included that could arguably be worth of inclusion. For instance, we scored the original COVID response bill (liability immunity, KEMA, etc.) HB 2054 and did not score the package that ultimately became law – HB 2016 – from the special session. We make every attempt to not score the same policy issue twice and made the judgement that on-net HB 2054 offered clearer policy analysis. HB 2054 has better immunity provisions but did not have the contact tracing ultimately included in HB 2016.

Lifetime scores are available here and capture not only the votes of any given session but track how legislators consider policy over time. It is our sincere hope that the Kansas Freedom Index provides the opportunity for discussion and analysis on the policy issues facing our state. It is not intended to help or hurt the electoral prospects of any candidate but is the result of non-partisan analysis for consideration by an informed public.