Over the past few decades several movies have been produced in which the protagonist(s) has to relive a day over and over again until some unknown variable breaks the chain. The most famous is Bill Murray’s Groundhog Day (can it really be 20 years old?). Other movies that have followed suit include Source Code, The 12 Dates of Christmas, Repeaters (a little-known gem of a movie I highly recommend), and this summer’s acclaimed Tom Cruise adventure Edge of Tomorrow.

The good news, with a caveat, is that Kansas high school graduates continue to outperform the re 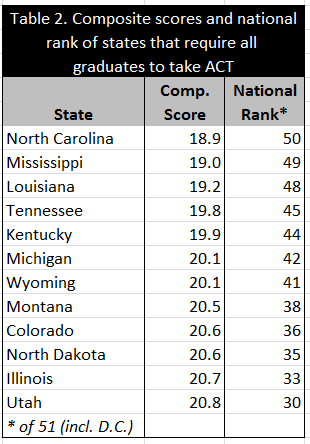 st of the country. Here’s the caveat: 12 states require all high school graduates take the ACT, whether or not they plan to attend college. Predictably, Table 2 shows that those states rank in the bottom half of the nation and distort the performance of states like Kansas that do not require all graduates to take the ACT.

There has also been a “Groundhog Day” effect when it comes to the performances of racial/ethnic subgroups.  Table 3 shows that there has been virtually no change in the past five years among all these subgroups. What is perhaps most troubling, however, is that this means the performance gap of African American and Hispanics persists statically. (Note: ACT does not report data by income level.) 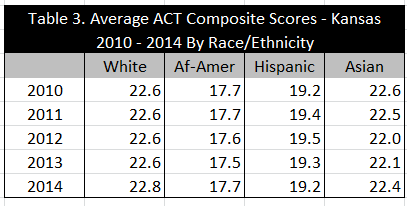 ACT provides College Readiness Benchmark Scores that indicate what percentage of students have “a 50% chance of obtaining a B or higher or about a 75% chance of obtaining a C or higher in the corresponding credit-bearing college courses which include English Composition, Algebra, Social Science and Biology.” Table 4 provides that data by racial/ethnic subgroup and the accompanying chart is a graphic representation of the same. 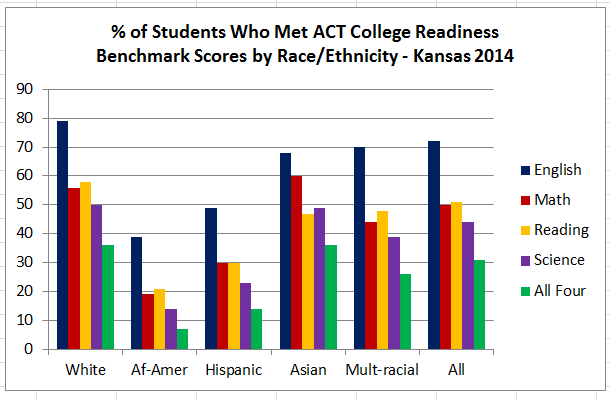 What first jumps off the screen is how few meet college readiness for all four courses. Only three in ten 2014 Kansas graduates have a 75% chance of getting a C or better in courses in the four core areas. Yikes. And a glance at the chart provides a quick visual of the predicted performance gaps of African Americans and Hispanics as this cohort goes on to post-secondary education. Only 7% of African Americans and 14% of Hispanics are college ready in the four core areas.

Remember in Groundhog Day when Phil tries to win the affection of Rita (Andie McDowell)? He tries and tries too hard to be what he thinks Rita wants him to be, of course, to no avail. It’s not until Phil has an epiphany and changes his behavior that he succeeds in both getting the girl and moving to the next day.

I believe that parallels the relationship between education funding and ACT scores. More and more of the same will not garner a different result. More funding has not and will not increase ACT scores just like being more of what Phil thought Rita wanted didn’t improve his chances with her.  Whether it’s higher composite scores, reducing achievement gaps or students being more “college ready,” performance will be fated to an eternity of February 2 until the education establishment has a Phil Connors-type epiphany. 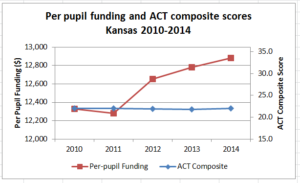 As I have presented in a previous blog post, getting serious about expanding public charter schools would be a good place to start, as would providing scholarships and other alternatives for at-risk students. An education system with accountability, transparency and individualized instruction that allows each child the best opportunity to succeed is crucial to moving the needle forward.

Then maybe we’ll wake up to February 3.