A state-wide task force charged to study teacher vacancies and a looming supply shortage in Kansas presented its report to the State Board of Education earlier this month. What could have been an opportunity to raise probing and difficult questions was wasted on a report full of fragmented recommendations that appear to be more self-serving than dealing with the underlying issues. On the other hand, what else would be expected from a 28-member committee comprised entirely of people from inside the education community?

The task force reported that in the 2015-16 school year there were 277 teacher vacancies statewide in 58 different districts. They focused on the 109 in the southwest part of Kansas, 61 in Wichita, and 28 in Kansas City. The committee responded by recognizing the need to improve recruitment to those areas. What they failed to note is that six districts across the state accounted for 176 of the 277 vacancies:

The remaining 101 vacancies were spread over the other 52 districts, 29 of which only reported one vacancy. A more reasonable conclusion is that teacher vacancy is not a statewide epidemic, but one concentrated in a handful of areas. The task force should have recognized the concentrated nature of the vacancies and progressed from there.

Subsequently, the task force failed to ask why there were so many vacancies in these districts. Is it the location? Is it the district? Are th 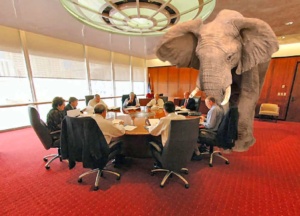 e vacancies related to subject matters or grade levels? In places like Dodge City, Garden City and Liberal part of the answer could be the challenges facing teachers in districts with a rapidly growing diverse student population in which English is not their first language. Is it really a retention problem and not a recruitment issue? These questions were not explored in the report. Perhaps some of these inquiries would have been raised had there been committee members outside the education establishment who wouldn’t have either missed or avoided the elephant in the room.

The task force addressed the drop-off in the number of college students who are seeking an education degree. But instead of analyzing the concern critically, they chose misguided recommendations aimed at the Legislature. They identified “current and ongoing instability of education-related funding and policies in the Legislature (that) deter students and others from entering the profession.” They also claimed “recent changes to KPERS and an emphasis on defining ‘contribution’ rather than ‘benefit’” is a detriment to those entering the profession. This is where they really could have used committee members outside the education field to provide a different perspective.

It’s an incredible stretch to think young adults just entering college who might otherwise want to become teachers would choose a different career path because of funding policies of the Legislature and issues dealing with retirement. How many college kids even understand the concept of defined benefit vs. defined contribution when it comes to a retirement system? Most young teachers I knew didn’t understand how KPERS works even after being in the system. I’ll bet more twenty-somethings know what capers are than what KPERS is. These are conclusions that can only be made by people who are projecting their own concerns after being in the system for many years.

One possible explanation of a shrinking base of those working toward a teaching degree was completely overlooked. That is the impact of the rapid escalation of the cost of a four-year degree and how much emphasis is now put on what amounts to a cost-benefit analysis of getting a college degree. Might they have avoided that issue because four members of the task force represented post-secondary teacher prep programs?

The biggest failure of the task force was not getting to the “Why?” regarding the issue of establishing and maintain an adequate teacher supply. Instead of making a handful of manageable, focused recommendations to get to the “Why?”, the report included 58 recommendations.  Yes, 58. Most of them can be categorized as self-serving, extremely narrow in scope and/or misguided – none of which address underlying causes.

Certainly the supply of teachers is a vital issue that should continue to occupy the front burner.  A more effective way of attending to matters related to an adequate teacher supply would be to establish a smaller, more diverse working group to tackle the “Why?”. But we must not be content with simply having an adequate supply of teachers. Our schools must be supplied with effective teachers, since the teacher has by far the biggest impact on student success.