Four Reasons for a Flat Tax

Over the last year, a “Flat Tax Revolution” kicked off with four states across the country enacting legislation to go down to a single personal income tax rate; Kansas, along with many states, has a graduated system whereby different income levels are taxed at different rates. The Sunflower State would likely benefit from joining those ranks and embracing the benefits of this reform. Here are four reasons why citizens in states with a flat tax would expect to have more economic opportunities and greater prosperity.

Simple to Understand and Implement

A flat tax is easy to understand and implement because taxpayers don’t have to consult a CPA to understand the impact. Americans spend 2.6 billion hours on tax preparation every year, not to mention hundreds or thousands of dollars on help calculating their taxes and navigating a web of deductions, credits, and other loopholes – often specifically tailored so that only a few people can take advantage of it. Contrast the typical process for a flat tax and the simplicity is apparent. For example, let’s say my taxable income after credits and deductions was equal to Kansas’s median household income of $64,521 last year, and I am taxed at a flat rate of 5%. I therefore owe $3,226 in my income tax to Kansas. Even if some simple and broadly applicable credits or deductions still exist (i.e., child tax credit, mortgage interest deduction) the benefits to families are obvious. Reducing the complexity of a tax reduces the time and money taxpayers spend to pay it, never mind the heartache of hoping you did it correctly.

The role of taxation is to pay for government spending on its core public services, not to be a form of wealth redistribution. By principle, an income tax system with graduated rates distinguishes between taxpayers based on their income, making wealthier people pay more and poorer people pay less. This plays out in Kansas. According to a four-year average of 2018 through 2021 tax returns from the Kansas Department of Revenue, people with incomes less than $50,000 made up 17% of adjusted gross income (AGI) in the state, yet paid 9% of the tax. On the other hand, people with incomes more than $100,000 made up 60% of AGI and paid 68% of the tax. 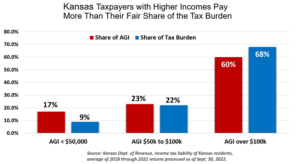 A properly structured flat tax would mean nobody pays a higher tax rate than they do now, and all taxpayers should get a reduction.

Increases the incentive to work

An income tax affects people’s willingness to work: the more a worker is taxed, the less they earn and can spend, and thus can be dissuaded from working more. Studies of flat taxes in Europe have found that their implementation increases the number of people working and the number of hours they work, with the most significant effects coming with tax cuts for people with lower incomes.

Furthermore, flat taxes mean that people are able to keep more of the money they’ve earned. This is the point of tax cuts in the first place. Tax cuts place trust in individual Kansans to manage their lives and know what is best for them. Taken in aggregate, that means Kansans have more money to spend, invest, and save to provide new opportunities to themselves, their families, their businesses, and their communities.  A nationwide flat tax was estimated to increase savings by 10 to 20%.

The benefits of a flat tax range from helping an average family get through tax time as painlessly as possible to long-term economic growth. Any sort of relief is a step forward for Kansas to break its five-decade-long pattern of economic stagnation.

Again, this means opportunities for Kansans. The anti-Brownback narrative prevalent throughout the recent election was consciously deceptive. While Kansas has much-publicized budget challenges, states like North Carolina, Indiana, and Tennessee successfully cut taxes.  The Brownback administration simply bungled the implementation.  One of the biggest mistakes was deeply cutting taxes and increasing spending; that’s a fourth-grade math problem that Brownback, Democrats, and some Republicans ignored.  Many other mistakes are outlined in What was Really the Matter with the Kansas Tax Plan.

A flat income tax would be vital relief amidst Kansas’s many tax woes, including the highest taxes on mature businesses, the 9th highest state sales tax rate, and a retirement tax on all non-state pensions.