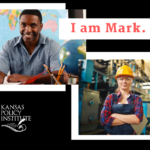 Who is Mark Janus?

This week, Mark Janus is visiting the Kansas Statehouse in Topeka to share his story. On June 27, 2018, the U.S. Supreme Court ruled in the case, Janus v. AFSCME, that every public worker has a constitutional right to resign from a union whenever they want.

Mark was a State of Illinois employee who disagreed with statements his union was making with his dues. He was being forced to support speech that wasn’t his. He wanted his money back and the Court agreed.

Today in Kansas, teachers and other public workers still find it difficult to opt-out of their unions when they wish. Some unions in Kansas make the opt-out process difficult. Public workers need to have a choice when it comes to their union. Workers should have the freedom of choice, fairness and a lack of pressure or coercion.

As Kansans who support the first amendment, we want our State Legislature to comply with the Supreme Court on the Janus v. AFSCME case.

…We have therefore recognized that a “‘significant impingement on First Amendment rights’” occurs when public employees are required to provide financial support for a union that “takes many positions during collective bargaining that have powerful political and civic consequences.”

Workers deserve to have a choice and a voice when it comes to union representation. This is why Mark’s journey is so important to all Kansas public workers.

Sign HERE if you want the Kansas Legislature to comply with the Supreme Court’s decision to honor the choice – the free speech – of public employees.