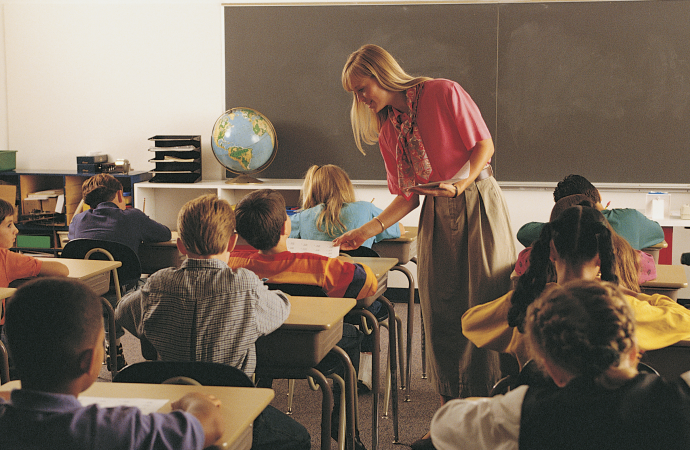 The Kansas Education Accounting Manual tells school districts that Instruction – direct interaction between teachers and students – is “…the most important part of the education program, the very foundation on which everything else is built. If this function fails to perform at

the needed level, the whole educational program is doomed to failure regardless of how well the other functions perform.”  Knowing this, local school boards and administrators reduced the share of spending allocated to Instruction last year to a new low of just 51.9%.  Kansas Policy Institute has been tracking district spending allocation since 2005.

Spending data for each district is compiled from the Comparative Performance and Fiscal System (CPFS), with Capital Outlay spending all counted as capital. KSDE allows some capital spending to be allocated to other cost function but that can show spikes and large declines for some districts, so we report all capital outlay in one account in the adjacent graphic and for district comparisons found on KansasOpenGov.org. 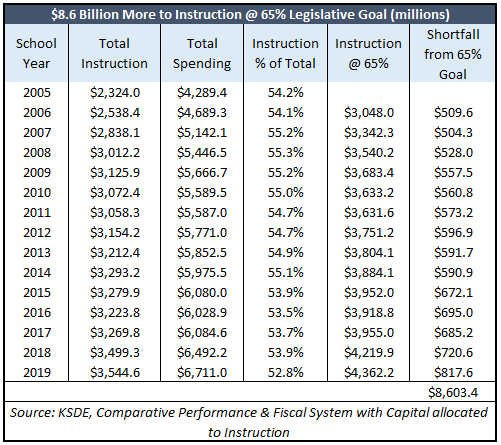 After the state supreme court ordered an $853 million spending increase in 2005, the Legislature passed a policy goal telling districts that most of the new money should go to Instruction, with a target of 65% of total spending.  Counting capital outlay allocated to Instruction, districts put 54.2% of total spending into Instruction in 2005, and nudged the allocation a little over 55% in a few years.  Since then, the allocation including capital outlay has declined and it also hit a new low last year, at 52.8%.

Money matters, of course, but it’s how money is spent that can improve achievement rather than simply spending more in total.  Local school boards and administrators have shown they won’t spend money where it can make a difference, defying both legislative policy and the Department of Education Accounting Manual guidance.

The House of Representatives narrowly passed a bill to require districts to certify that they’ve allocated sufficient funds to Instruction so that students can get to grade level but the Senate didn’t get to vote on the bill.  School superintendents and unions will again vehemently oppose that accountability measure when it returns in the 2020 session, but achievement won’t improve until school boards and administrators are held accountable.

State assessment results show the majority of 10th-grade students in many of the state’s largest cities are below grade level in math, with just a small portion being on track for college and career.

Stating these inconvenient truths often evokes anger, but if Kansans really want to do something ‘for the kids,’ they need to encourage legislators to pass real accountability measures.