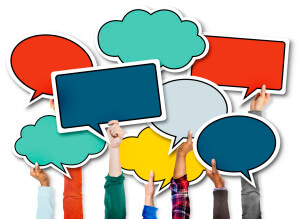 Legislators are facing a political dilemma when they return to Topeka in January.  They must either represent the will of the people who elected them or they must firmly reject Supreme Court school control. Supreme Court control of schools seen via a court demand of nearly $1 billion more in school funding.

As we wrote recently, the court pretty clearly says the Legislature must increase funding between $600 million and $1.4 billion annually by April 30, 2018 or it may order schools closed.  But a new statewide opinion survey shows voters overwhelmingly reject the tax hikes needed just to pay the minimum court demand, and only 1 in 5 voters believe the court should set minimum funding levels.

Only 25 percent of Kansans support a $600 million property tax hike and 57 percent are opposed, and the voters reject meeting the court’s minimum demand with a sales tax increase by the same 57-25 margin.  Opposition to another $600 million income tax hike is even stronger, with 73 percent opposed and only 14 percent in favor.   Meeting the court’s minimum demand with spending cuts would require an 18 percent reduction in non-education costs; on that option, 42 percent voters approve cuts of that magnitude, 32 percent are opposed and 25 percent aren’t sure.


These results come from a statewide public opinion survey conducted by SurveyUSA on behalf of Kansas Policy Institute.  The survey of 512 registered voters was conducted between November 15 and November 20 and has a credibility interval of ±4.4 percentage points.  Complete results and methodology are available online.

When the Court demands something in the neighborhood $1 billion be spent on schools – ignoring that more funding does not drive achievement – it does so with the threat of closing Kansas schools. 82% of Kansans want to see schools stay open while these funding questions are being decided; this squares with a Sebelius-era statute that, having never been taken up by a Kansas court, prevents schools from being closed by the Courts. Regardless of views on the correct amount of money to spent, Kansans clearly believe kids should have access to educational opportunity while legislators, administrators, and judges bicker. 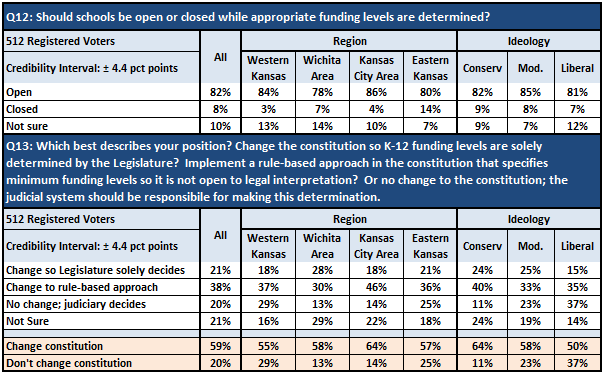 Kansas taxpayers have been the subject of nearly constant school finance lawsuits since the early 1990s. The poll results suggest that voters may be sick of it. 60% of Kansas voters want to have their voice heard by amending the constitution to stop judicial interference in the education of Kansas students. Only 20% think the courts are appropriately inserting themselves into the educational process.

Examples from around the country and here in Kansas – Montoy spending spikes – demonstrate that increased funding does not increase student achievement. The court’s ruling this autumn suggests that the debate about Kansas school finance will only continue. The Kansas Legislature is beginning to do their part with hearings today in Topeka. With this as background, Kansas kids will likely continue to suffer with flat-lined achievement and staggering achievement gaps. Kansas taxpayers on the other hand are clearly upset with the prospect of more tax hikes, education policy set by judicial fiat, and their children used as political pawns with the threat of school closure.