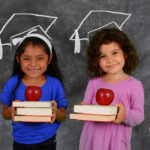 If you aren’t satisfied with the outcome after decades of effort, what makes you think that doing the same things over and over again will produce a different result?

That’s certainly the case with student achievement in Kansas, as evidenced by the 2020 ACT scores.

The average 2020 ACT score in Kansas declined for the fourth consecutive year, to 20.4.  Kansas is now below the national average, which fell from 20.7 to 20.6. There was also a decline in college-readiness to 23%, marking the fifth straight drop.

Only 23% of Kansas students did well enough to be considered college-ready in English, Reading, Math, and Science on the 2020 ACT.  That’s down from 27% in 2019 and, for the first time, below the national average, which is 26%. 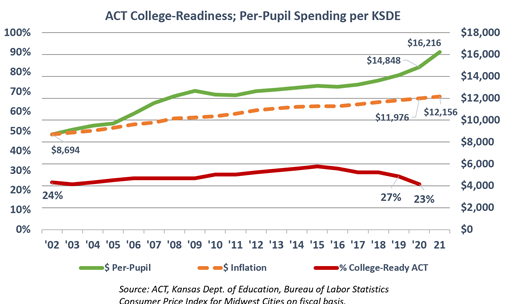 State assessment scores can only be compared back to 2015, and those have also declined.

Many Kansas districts have more than twice as many 10th-graders below grade level in math than are on track for college or career.  For example, USD 501 Topeka has 54% below grade level and only 15% on track for college or career.  Other districts in that same situation include Hutchinson, Salina, Wichita, Garden City, Dodge City, Kansas City, Pittsburg, Newton, Wellington, and El Dorado.

So here’s the question.  How many generations of kids must continue to suffer under the same old system before legislators give them a fighting chance?

Change won’t happen without legislative intervention because local school boards, unions, and other institutional interests refuse to place students’ needs ahead of their demands.

The institutional interests reject student-focused solutions that force them to compete, but they’ve had decades to raise student achievement with multi-billion-dollar funding increases.  And while they’ve been resisting change, states like Florida implemented multiple money-follow-the-child programs, and now Florida students have surpassed Kansas and among the best in the nation.

Since money – particularly the potential loss of it – is the #1 motivator for school boards, legislators should create money-follow-the-child programs for students below grade level on the state assessment and kids with disabilities, including dyslexia.  That provides immediate relief to students for whom their current school isn’t working and should motivate school boards to focus resources on getting kids to grade level.

House Bill 2119, in the K-12 Education Budget Committee, would accomplish this goal.  It provides education savings accounts worth roughly $5,000 to any student identified as academically or financially at risk by the school district, and also if schools don’t offer full-time in-person learning.

Committee Chair Kristey Williams is leading the charge on HB 2119.  She and several other committee members will be supportive, but we also know there will be opponents.  The education lobby – school boards, teacher unions, administrators, and the PTA – will do everything they can to kill the bill, so every committee member needs your encouragement.  This downloadable Excel file has their emails and office numbers.

Legislators can put Kansas kids on the path to success with the courage to break from the past; otherwise, it will be déjà vu all over again.