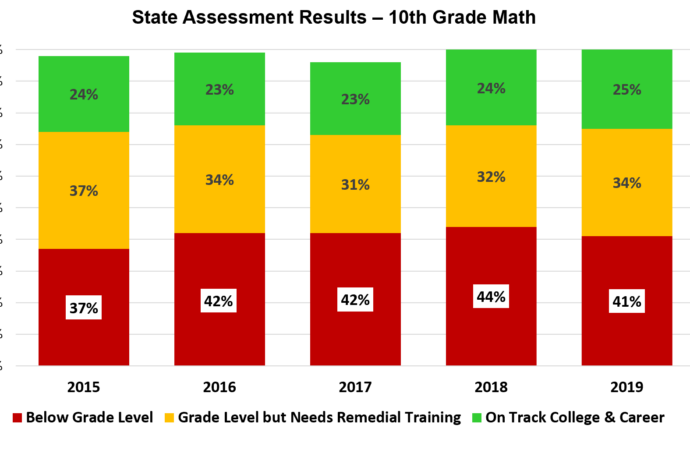 The Kansas Department of Education recently gave KU a 5-year, $30 million contract to help KSDE perpetuate abysmally low student achievement in Kansas.   OK, that’s not exactly the way the deal is described in the University of Kansas press release, but it’s an honest reflection of history and another example of students getting the short of the stick in Kansas public schools.

The lucrative arrangement between KSDE and KU goes back 40 years according to the press release.

The parties may be proud of the tests they design but they should be ashamed of the results reflected on those tests.  ‘Meeting federal requirements’ is akin to winning a participation trophy in T-ball; what matters is whether kids are getting the education they deserve, and on that measurement, Education Week magazine consistently gives Kansas a “D” for student achievement. 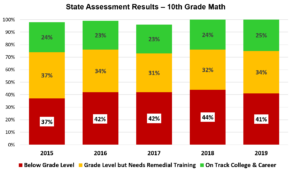 As shown on the adjacent chart, 41% of 10th-graders in Kansas were below grade level in Math in 2019; that’s worse than five years ago when 37% were below grade level.  About a third of students – 34% – were considered to be at grade level but still needed remedial training to be on track for college and career.  (If you’re wondering how a student can be at grade level and still need remedial training, you’re not alone.  We’re just sharing the definitions developed by the KU team with KSDE input.)

Just a quarter of 10th-graders did well enough to be considered on track for college and career.  That’s a mere 1 point better than in 2015.

Is it any wonder that community colleges and universities are spending millions on remedial courses for incoming freshmen?  Or that employers have trouble finding qualified workers?