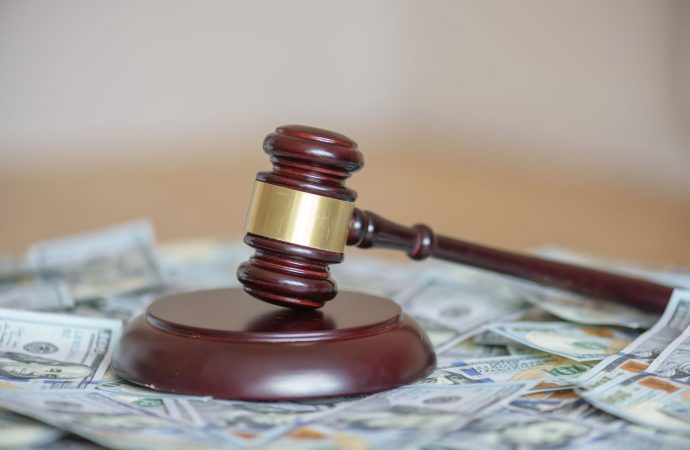 The Kansas Department of Education (KSDE) says school funding will average $15,105 per pupil for the current school year.  That’s more than a 7% increase over last year’s record of $14,085 per pupil.  KSDE Deputy Commissioner Dale Dennis provided the information in an 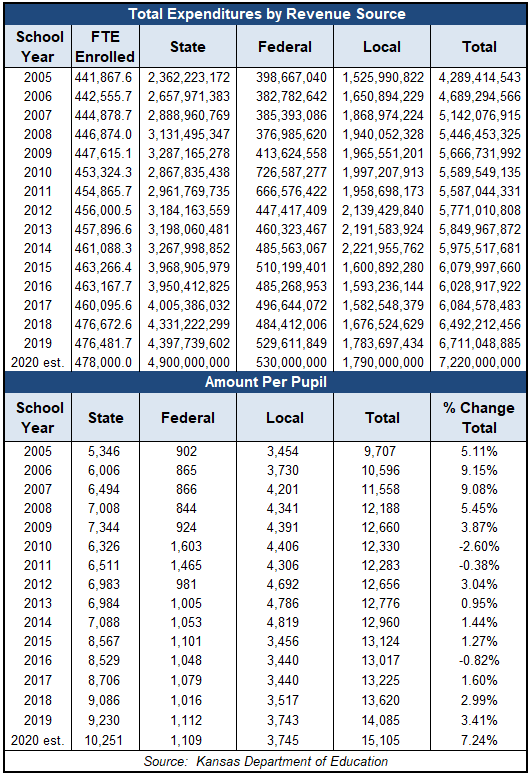 KSDE estimates total aid at $7.2 billion, including $4.9 billion from state sources; local aid is predicted to be $1.8 billion and $530 million is anticipated in federal aid.  Enrollment is expected to increase to 478,000 after a small decline in enrollment last year.

Last year’s record of $14,085 per pupil is 45% higher than in 2005, the year before the previous court-ordered funding increase took effect.  Inflation for Midwest cities on a fiscal-year basis over that period was 27%.

State aid per pupil is estimated at $10,251 this year, reflecting the largest increase over last year and prior years, although part of the increase results from an accounting change.  The 20 mills of mandatory property tax for schools was counted as local funding through 2014 but was accurately reflected as state aid beginning in 2015.  The portion of last year’s state aid from the 20 mills was $1,424 per pupil, so the balance of $7,806 per pupil represents a 46% increase in all other forms of state aid since 2005.

KPERS pension funding was $267 million last year, or about $559 per pupil.  Bond & Interest support for new construction projects hit $203 million ($426 average per pupil) and Capital Outlay aid of $65.4 million translated to about $137 per pupil.

The amounts for Bond & Interest, Capital Outlay, KPERS, and the 20 mills of property tax come from the July Comparison Report published by Kansas Legislative Research.  Base state aid is calculated based on fulltime equivalent enrollment, and all other aid is the difference between total school funding from the state and the listed components. 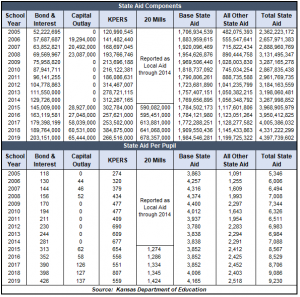 The highest spending per pupil last year was in USD 291 Grinnel in Gove County; the district spent $36,522 per pupil on its 74 students.  The lowest spend was USD 218 Elkhart (Morton County) at $8,566 per pupil.  Elkhart has a robust online education program for students across Kansas and it is much less expensive to operate.

KSDE publishes total school funding and per-pupil amounts for each district on their Data Central site.  Select the Total Expenditures report and a district to get results.  The adjacent table lists school funding amounts for the 25 largest districts, and a complete list will be available soon on KansasOpenGov.org along with spending breakdowns by cost center (Instruction, Administration, etc.). 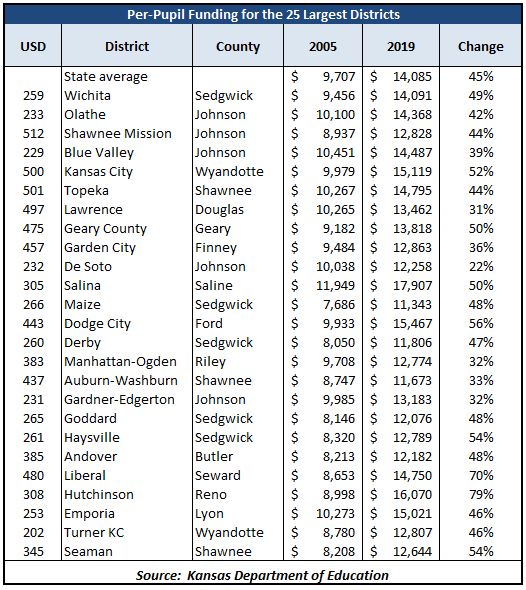