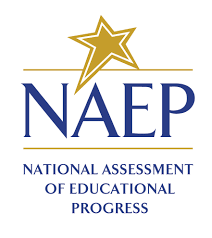 The U.S. Department of Education released the 2019 scores for the National Assessment of Education Progress (NAEP), and the results are not good for Kansas students. Not only did composite scores drop considerably from 2017, Kansas students are now performing worse than in 2003. Only one in three Kansas 8th graders is proficient in math or reading. The same is true for 4th graders in reading. Fourth graders in math perform only slightly better, with 40% testing proficient.

It is sad but true that these results didn’t even raise an eyebrow from Commissioner Watson or the state board. At the recent November board meeting, the Commissioner of Education spent such little time discussing the fact that state assessment scores were flat and NAEP scores were lower, if you had sneezed you would have missed it. Instead of admitting that the needle hasn’t moved on the performance of low achieving students – despite the addition of hundreds of millions of dollars that were to be directed toward helping those students’ achievement – he informed the board how good the top-performing students are doing. KSDE’s primary focus in the post-No Child Left Behind years seemingly is to avoid accountability. Instead of a forthright discussion on The Nation’s Report Card, as NAEP is called, we’re left with the process-based Kansans CAN and the “rocket to the moon” initiatives. Writing as a former teacher for two decades, I can attest that test scores are not the be-all and end-all of education – but they are important and necessary indicators of how well students are learning.

NAEP, a biennial test of math and reading, is given to a representative sample of 4th and 8th graders in all states. It is considered the gold standard of assessments and the only nationwide exam that allows for reliable trend analysis in math and reading. For the first time in the history of NAEP, the composite score for Kansas students declined from the previous test (2017) in all four areas: 4th grade math and reading and 8th grade math and reading. Although nationwide the overall scores crept downward, the performance of Kansas students was a much starker decline.  NAEP also reports by performance categories. The percentage of Kansas students who scored either at the Basic level or the Proficient level also dipped in all four categories.

Even more disturbing is the data in the table below, which is a summary of all-student performance for 2019 along with a comparison to 2003 levels. The data reveals that Kansas students are performing below 2003 levels, despite an increase in spending of more than 54% in that same time frame. 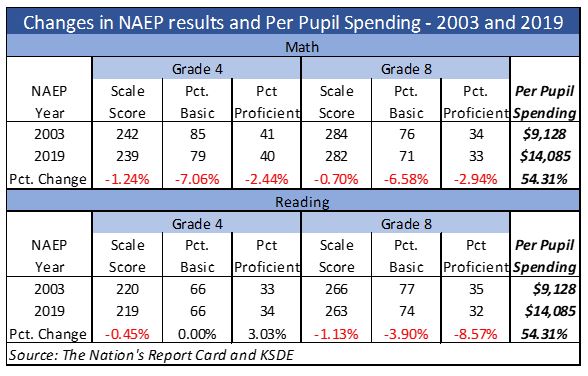 The following table indicates that income-based achievement gaps continue to be significant. The gaps increased for math in both grades. A staggering 32-percentage point gap exists in 4th-grade math. Fourth-grade reading is only slightly less appalling, with a 28-percentage point gap. There is a different phenomenon in 8th grade. The gaps in both reading and math decreased from 2017 but it’s not due to improvement by the low-income students. On the contrary, it is a function of the not-low-income students faring worse. 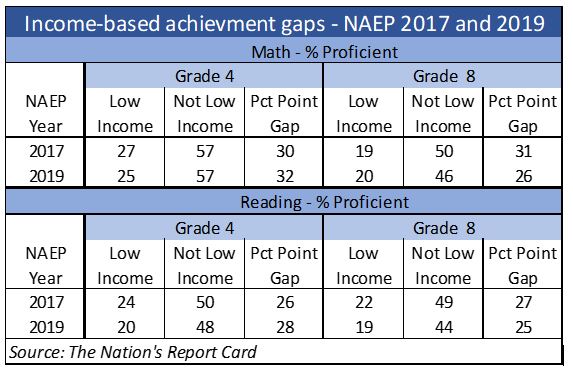 These troubling numbers come on the heels of KSDE releasing the 2019 state assessment results. As KPI described in this blog and was detailed by The Sentinel, state assessment performance remained essentially flat, despite an increase of hundreds of millions of dollars to K-12 education pursuant to the Gannon lawsuit. Combined the data provides hard evidence that counters the claim by the education community and buoyed by the Kansas Supreme Court that more money leads to higher student achievement.

Clearly, the concept that more money leads to higher achievement has become a platitude.

Since it is also implausible to believe more money could somehow negatively impact test scores, what is the explanation for the precipitous decline in NAEP scores in Kansas? The most credible answer is that KSDE and the state board have significantly deemphasized assessments while focusing on process outcomes like enrolling more students in pre-K and creating individualized academic plans. That move away from accountability measures has permeated into classrooms across the state. KPI has shown here that Education Commissioner Randy Watson sent a video presentation to educators across the state to that effect.

One wonders if that behavior would change if the Legislature tied at least a portion of funding to assessment results.