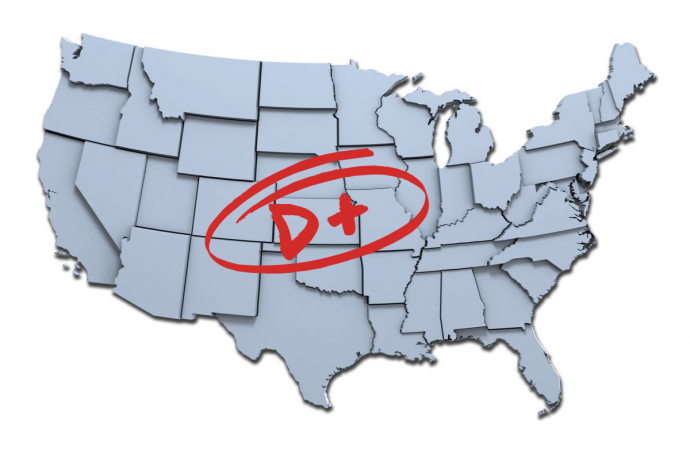 Kansas education performance is somewhere in the middle – not Top 10 – of a nation that shows generally mediocre performance. This finding largely repeats that of last year and comes from the 2019 Quality Counts annual report and state rankings from Education Week. It is not good news for Kansas students or residents. Regarding student achievement, Kansas earned a grade of D+ and ranked 34th among the states and D.C.

Combined with the other two categories released earlier this year – “Chance for Success” and “School Finance” – Kansas earned a composite grade of C, warranting a national rank of 27th place (down three places from 2018). Kansas ranked 20th in “Chance for Success” – which is essentially a reflection of the economy of the state and educational attainment of the adult population. In “School Finance,” which combines a complex set of variables of per-pupil spending and how “fairly” – in Quality Counts terms – spending occurs within the state and relative to the nation, Kansas ranked 28th.

The “K-12 Achievement” ranking is particularly troubling. Quality Counts relies heavily on NAEP data, the only achievement data that can be reliably compared state-to-state. Quality Counts used 14 different NAEP data points within three subcategories – overall scores, change in scores from 2003, and income-based gap scores – which comprised the bulk of the achievement rankings. Here is a summary of the range of Kansas rankings among the states and D.C. within those three categories: 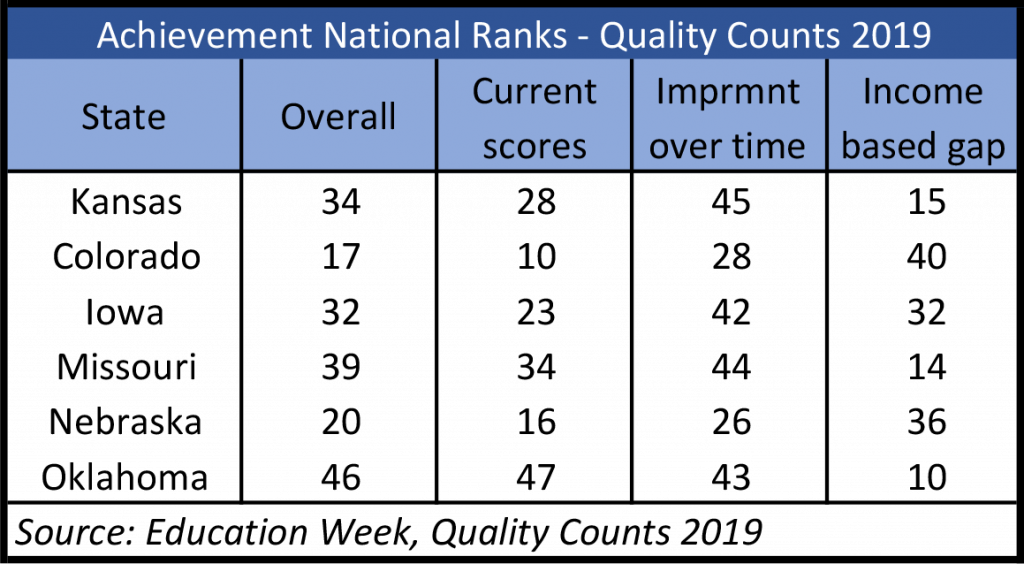 This data certainly runs counter to the education establishment’s claim that the Kansas education system is in the top-ten across the country. Of course, the establishment will look at the school finance data utilized by Quality Counts and note that most of the states ahead of Kansas rank higher in the “School Finance” category. Translated: more money = higher achievement. However, there is adequate evidence within the Quality Counts rankings that once again debunks that myth. Eleven states ranked lower than Kansas in “School Finance” but outperformed Kansas in “K-12 Achievement.” Once again this provides hard evidence that it’s a mixed bag when it comes to spending and outcomes.

What stands out as the most significant when looking inside the numbers is the troubling difference in Kansas between “Chance for Success” and “K-12 Achievement.” Kansas received a relatively high grade of B- in “Chance for Success,” but a D+ in “K-12 Achievement.” Only 3 other states and D.C. had such a precipitous difference among those two categories. This means that despite being in a state with a population that has a relatively high socioeconomic status – with kids well-prepared to learn – students don’t perform very well.

Why is this? It’s a question that needs to be addressed by the state board, local boards of education, and KSDE. Instead of talking about an educational moon launch they should be focused on the more earthly, academic needs of Kansas students.