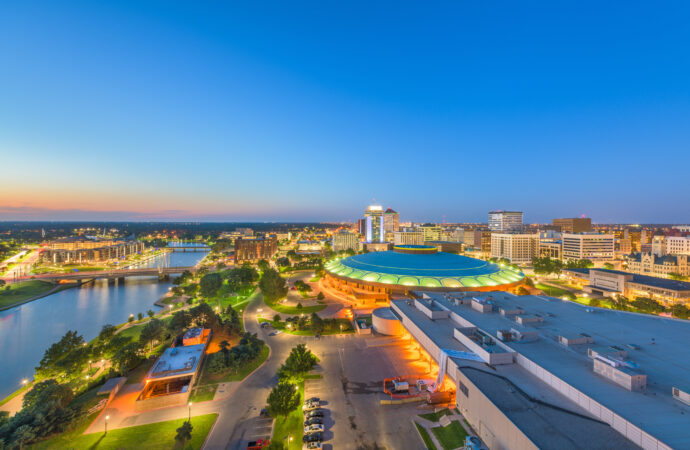 The November Jobs Report from the Bureau of Labor Statistics shows Kansas gained 2,400 private-sector jobs. This is a 0.2% increase from last month’s job numbers and is the slowest rate of job growth since June of this year. At the rate of growth that Kansas has experienced since the start of 2021, the state will fully recovery to its pre-pandemic level of jobs by around August of 2022. Kansas is still 27,000 jobs below its January 2020 levels. 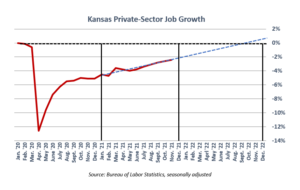 The job growth largely comes from 900 new jobs in the Leisure and Hospitality industries and 600 new jobs in Professional Scientific and Technical jobs, as defined by the BLS. 600 new jobs were also added in Transportation industries in the state. Manufacturing, Wholesalers, and Retailers all saw 300 new jobs each. Information, Management, and Education jobs also saw small growth at roughly 100 jobs each. The biggest loss came from Administrative Support and Waste Management jobs which declined by 700. Finance and Insurance jobs declined by 400, Real Estate lost 300 positions, and Financial Activities lost another 100.  Mining and Logging and Construction sectors both stayed at the same level of jobs from last month. At the same time, 300 government jobs were added.

The unemployment rate in Kansas declined from 3.9% last month to 3.6%. At the same time, the labor force participation rate hit its lowest point since June of this year at 67.1% – a 0.3 percentage point drop from last month. While some may interpret the decrease in the unemployment rate as good, it should be read in the context of people stopping their job search, thereby lowering the labor force participation rate. This means 6,290 people left the labor force in Kansas compared to the 2,400 gain in the number of jobs

These data points aren’t indicative of the “booming economy” that Governor Laura Kelly and Lieutenant Governor David Toland are claiming. Their arguments point to high government-driven investment as a sign of economic growth, but these investments are being brought about by subsidies (mainly industrial revenue bonds) and not a completely natural market. Kansas is ahead of Iowa and Oklahoma in its pandemic job recovery, but still behind Colorado, Missouri, and Nebraska.

The recently released 2022 State Business Tax Climate Index from the Tax Foundation ranks Kansas as the 24th best state for business across the country. This is an improvement from 34th last year due to modernizations regarding how it treats small remote sellers of goods as well as catching the state up to changes in the Tax Cuts and Jobs Act in net-operating loss taxes and other fields. There are plenty of changes Kansas could do to promote real economic growth. Indexing the tax codes based on inflation, offering safe harbors and more focused administration on small remote sellers, and reducing high property taxes on businesses all reduce barriers on business and promote economic development in the state.