Payroll jumps in Shawnee Mission but not for teachers 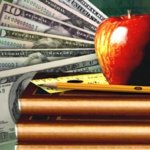 USD 512 Shawnee Mission reports a $5.6 million payroll increase for the 2018 school year, of which a measly $467,000 was spent on teachers.  Put differently, total payroll for positions identified as teachers increased by less than half of a percent but all other pay jumped 8.1 percent.  The data comes from the district’s response to Open Records requests and the complete payroll listing is posted at KansasOpenGov.

So where did the rest of the money go?  The short answer is ‘everywhere.’  Interim Superintendent Kenneth Southwick got a 15.5 percent increase to $265,515.  Southwick was Deputy Superintendent the year before and Shawnee Mission still has five (yes, five) Assistant Superintendents who, on average, got a 4.3 percent pay bump.  Andrew Lane, Executive Director of Information and Communications Technology, was rewarded with an 8.9 percent hike to $162,622 and Robin Bell, Director of Family Services got a 23.4 percent boost to $153,097.  Chief Financial Officer Russell Knapp’s pay jumped 14.6 percent to $152,417. 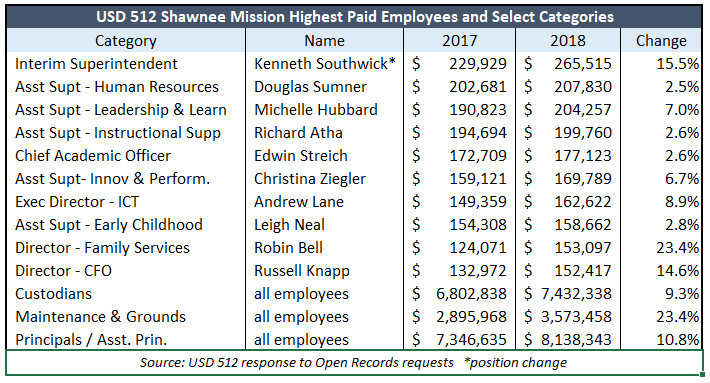 Principals and Assistant Principals collectively saw pay jump 10.8 percent.  Spending on a small army of maintenance and grounds staff shot up 23.4 percent and custodian costs went up a little over 9 percent.

Similar payroll disparities between teachers and all other staff was found in USD 500 Kansas City, and USD 233 Olathe awarded increases averaging 13 percent to its top ten administrators.  Some districts’ payroll listings don’t clearly identify teachers but there’s more evidence that teachers are being short-changed by local school boards.

An analysis of four large school districts’ 2018 budgets – Wichita, Blue Valley, Geary County and Shawnee Mission – shows Instruction spending will increase at a much smaller rate than Administration and other categories this year.

There’s an old saying that, “Budgets reflect values.”  It appears that local school boards and administrators place much lower value on teachers than on a lot of other stuff.