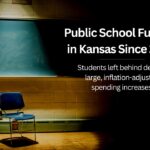 A KPI analysis of education spending and student achievement in Kansas over the last 30 years shows that despite huge spending increases, many students have been academically left behind. The study, conducted by Dr. Ben Scafidi, a professor of economics and director of the Education Economics Center at Kennesaw State University, compared public school funding and achievement since 1993 to determine whether there was a return on taxpayer investment. According to Scafidi, “(t)he primary finding is that between 2003 and the early 2020s achievement fell despite large inflation-adjusted spending increases.”

In support of this finding, Scafidi presents the following evidence:

This evidence is consistent with what KPI has been presenting over the years, that increases in educational funding – mostly court-ordered – have no association to like-increases in student achievement. Scafidi’s research provides the same conclusion utilizing a deeper analysis.

So, what can be done to create an environment that is favorable to increases in student achievement? In a word (two words): school choice. Scafidi recommends Kansas follow the choice models in Arizona and Florida. These models include broadened public charter school opportunities and robust private school options through educational savings accounts (ESA) and expansive scholarship programs for special needs students.