U.S. Census data just released shows school cash reserves for 45 states set a new record in 2015 at $203 billion, up from $188 billion in 2014.  Alaska, Hawaii, Maryland, North Carolina, Virginia and the District of Columbia are not included in the totals because Census says their schools districts’ holdings cannot be separated from the assets of their parent governments.

combination of operating cash funds and capital outlay.  Unspent bond proceeds is not reported by Kansas school districts because the Kansas Dept. of Education only requires budgeted funds to be published and they don’t require that a budget be prepared for the Construction Fund, which is the repository for bond proceeds.  So while Kansas districts collectively reported having $1.7 billion in cash reserves, the state listing below shows total cash of $2.7 billion because there was a little over $1 billion in unspent bond proceeds.

The rules on using capital outlay cash vary by state but some states, including Kansas, allow school districts to use capital outlay funds for certain operating expenditures.  Still, even without separate totals for capital and operating cash, the range of operating and capital cash as a percentage of current operating spending is eye-opening.  Eight states listed below have less than 10 percent in operating and capital reserve but nineteen states have more than 25 percent in reserve; South Dakota has the highest ratio at 67 percent. 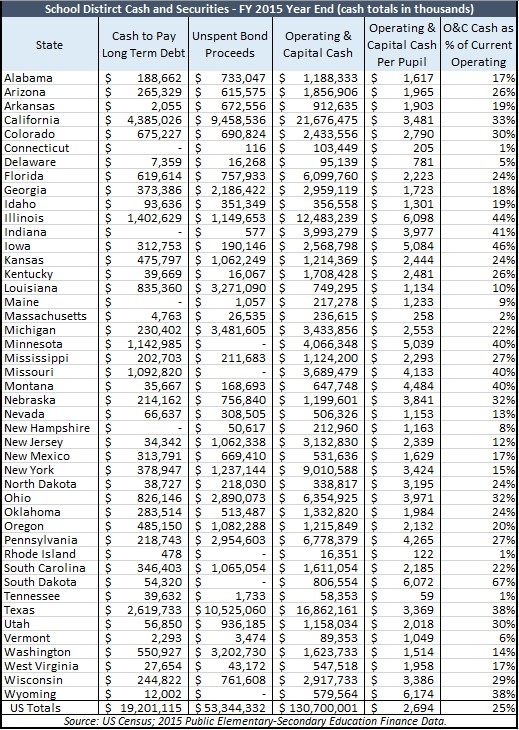