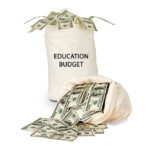 According to the latest student count data released by KSDE, districts across the state are set to receive in excess of $330 million in taxpayer funding during the 2021-22 school year for more than 70,000 non-existent students. Last year KPI published blogs here and here that disclosed how the state public school finance formula allows districts to be funded for thousands of phantom students state by applying base per-pupil state aid – known as BASE – through “adjusted enrollment” and “low/high enrollment.”

Adjusted enrollment simply means nearly all districts receive BASE funding based on the largest number of students among the current year and the previous two years. If enrollment for a district is larger in the 2019-20 or 2020-21 school years than the current year, the district will receive BASE based on the higher of those two years. The preliminary enrollment figures for the 2021-22 school year have now been released and the statewide adjusted enrollment is more than 15,000 higher than actual enrollment.

The idea of “smoothing” enrollment changes may have good intentions but the practical impact inflates spending to educate “students” who aren’t there. Just like with at-risk funding, we should at least demand honesty in how money is allocated and not obscure reality.

As described in an earlier blog, “low/high enrollment” provides every district with upwardly adjusted enrollment. It is based on a complex formula that gives all districts a larger enrollment figure than actually exists. For the 2021-22 school year, funding for 54,500 phantom students across the state is provided. 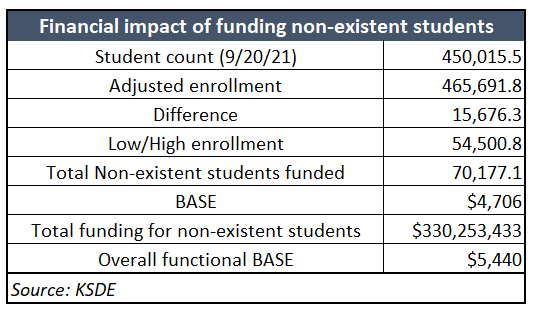 That $330 million could go a long way toward financing an educational choice program in the state. Given the poor achievement that continues to plague the Kansas public school system’s effort to educate students who “actually” exist, it makes no sense that they be entrusted with hundreds of millions of excess dollars each year to “educate” students who aren’t really there. Why not turn that money over to parents and families of students to allow them to make their own educational choices? Now that the U.S. Supreme Court has struck down Blaine Amendments, a part of many states’ constitutions – including Kansas, the Legislature should feel obligated to lead the effort to strike the Kansas Blaine Amendment and provide education funding to parents who wish to send their children to private schools, regardless of any religious affiliations.