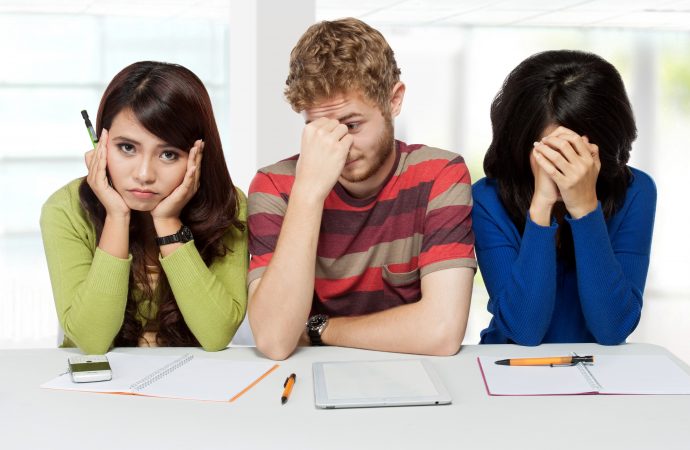 It’s pretty telling when student achievement is so low that the Kansas Department of Education will only talk about it in generalities.

Testimony presented by Deputy Commissioner Bran Neuenswander said state assessment scores were on a decline between 2015 and 2018, began to “level off” in 2019, but then fell in 2021.  (The assessment wasn’t given in 2020 because Gov. Kelley closed schools in the spring.)  He didn’t tell legislators that one-third of students in Grades 3 through 8 and 10 are below grade level in math, and only 28% are on track for college and career.  His testimony didn’t say that 30% of students are reading below grade level, compared to only 21% in 2015.

The excuses were very specific, however.  Declines in prior years were blamed on legislators for funding cuts, achievement ‘leveling off’ in 2019 was attributed to court-ordered funding increases, and COVID got all the blame for the 2021 decline.  The facts tell a different story, of course; more on that shortly.

Neuenswander told legislators that state proficiency levels are generally higher than they seem because Kansas has higher proficiency standards than most states.  Three of the four proficiency cut rates are above the cutoffs on the National Assessment of Educational Progress, but that doesn’t mean that proficiency is really above 60% as KSDE implied. (The Kansas proficiency standard for 4th-Grade Reading is below the NAEP level.)

Most parents would agree that neither 14% proficient nor 19% proficient is not even close to being acceptable.  But once that is established, the question becomes what local school boards will do differently to effect significant improvement in achievement.  And again, they don’t want to answer that question.  Just send more money.

Those of us with kids have all been disappointed with a report card at some point. The key difference is that when we know the child worked hard and earned a “C,” then they’ve done everything that they can. Many of us have also heard a child explain away a “C” by saying the class all underperformed or another excuse. The first example is okay and provides a basis for improvment. The latter is excuse-making that says nothing about the aptitude or effort of the student. Unfortunately, KSDE is in the explaining away camp.

Declines on the ACT test were blamed on the Legislature, which began paying for everyone to take the ACT in 2020.  In 2019, 72% of Kansas graduates took the test; it jumped to 82% in 2020 and fell back to 79% this year.  It’s true that higher participation will typically produce lower results because students who don’t plan to go to college (and tend to score lower) are less likely to take the test until it is “free.”  But KSDE didn’t mention that ACT college readiness was low and declining long before participation increased. 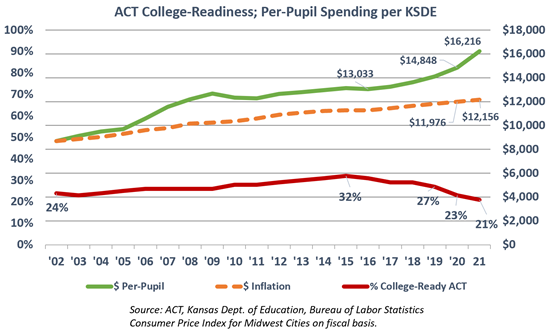 Only 32% of Kansas graduates were college-ready in English, Reading, Math, and Science in 2015 – the best it’s ever been – and now only 21% are college-ready.

But wait, it gets worse.  KSDE says ACT scores will continue to drop until about there is 95% participation.  Education officials thereby acknowledge that college readiness will likely dip into the teens yet don’t seem bothered enough to sound an alarm.  That’s because they prefer to use the high school graduation rate as a proxy for college and career readiness.

Education officials can control the graduation rate by handing out diplomas regardless of whether students can read or do math at grade level.  Diplomas are basically attendance awards for many students because, for years, there have been more high school students below grade level than are on track for college and career.

The choice, then, remains before the Legislature. Continue to be ignored while spending record sums on education? Or empower parents to take those resources, and find the right fit for each child? Florida implemented school choice in the late 1990s, and public school achievment improved dramatically. Give parents and children freedom, and the rising tide will lift the boats of kids, public schools, the economy, and the entire state.