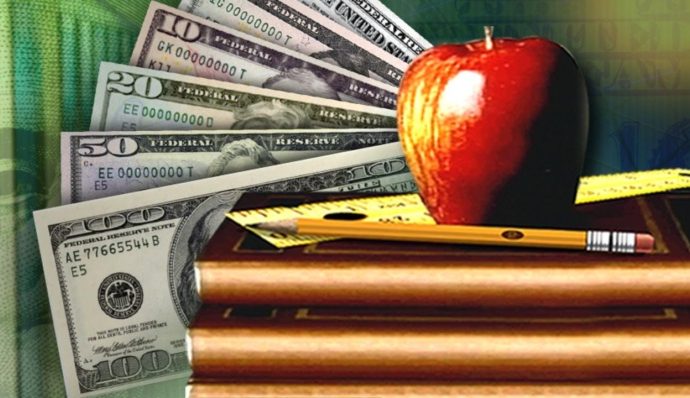 The new WestEd school cost study says “funding alone is not enough;…if one fails to consider how well resources are used, then increasing how much resources are provided may have a limited effect on student outcomes.”  But the Kansas school lobby is vigorously pushing the money correlation myth, hoping legislators and parents will think spending more money will magically cause student achievement to improve despite history that shows otherwise.

The WestEd study does claim to find a correlation between spending and achievement (not causation, mind you) but it’s based on what researchers call a bi-variate (two variables) analysis; they only examined spending and academic outcomes.  These bi-variate analyses ignore many other variables, as the late Senator Daniel Patrick Moynihan once famously (and very tongue-in-cheek) noted.  Observing that northern states tend to have better student outcomes, he said proximity to the Canadian border obviously had some correlation with achievement so the solution must be to move schools closer to Canada.

A scientific rejection of the correlation claim is found in a 2008 article in the Peabody Journal of Education.[i]  “Cost functions are superficially attractive because they appear objective, holding out the promise of scientifically estimating the cost of achieving specified levels of performance from actual data on spending,” say the authors.  They go on to say, “The problem…is that education cost functions do not in fact tell us the cost of achieving any specified level of performance, as claimed.”  They say the estimated relationship between cost and performance is highly unreliable; “it is typically estimated with huge imprecision, wide sensitivity to model specification, and by methods that often fail to eliminate statistical bias.  As a result, the cost estimates for raising performance to target levels have no scientific basis.”

Consider the cost study’s claim that an increase in the high school graduation rate is associated with an increase in cost.  The authors ignore that some students receive diplomas regardless of whether warranted by their academic accomplishments.  For example, the 2017 state assessment shows 43 percent of 10th graders were below grade level in Math and 31 percent were below grade level in English Language Arts; performance levels consistently decline from 8th grade to 10th grade, yet we’re to believe that 10th graders magically reverse course and become proficient by graduation.  And then large numbers of them fall out of proficiency over the summer and sign up for remedial training in college.

The WestEd cost study didn’t examine whether student achievement increased as a result funding increases in the past, but independent test results showed basically no change.  Kansas began participating in the Reading portion of the National Assessment of Educational Progress (NAEP) in 1998 and added Math two years later.  Test scores have been very consistent even though funding grew much faster than inflation and set another record last year at $13,237 per-pupil (2017 results are not yet published). 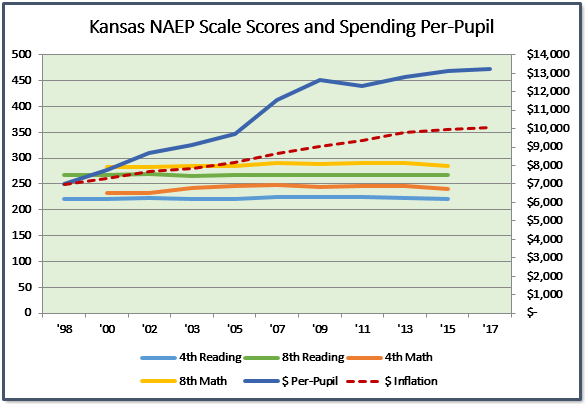 The same is true of ACT scores, for which data is available since 2002. 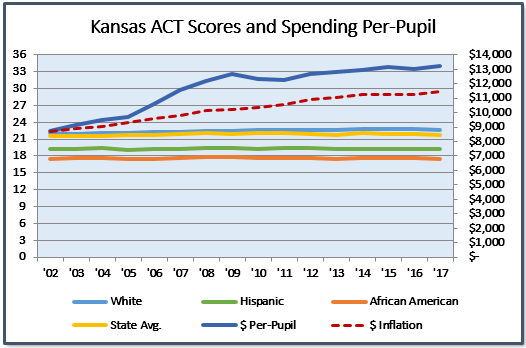 Spending and achievement comparisons across the 50 states also consistently refute claims that the former causes the latter to change.

Money matters, of course, but it’s how money is spent that can make a difference, not simply spending more.  So unless legislators can muster the will to hold schools accountable for improving outcomes and effectively using money, it won’t matter how much money is spent.  Achievement gaps will persist and large numbers of students will be deprived of the education they deserve.

[i] “What Do Cost Functions Tell Us About the Cost of an Adequate Education?” Robert Costrell, University of Arkansas, Eric Hanushek and Susanna Loeb, Stanford University.