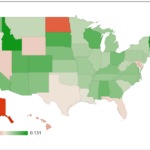 Kansas State Treasurer Lynn Rogers is one of 17 state treasurers who signed a letter to Congress asking to gift $350 billion to cities and states so they don’t have to find ways to operate more efficiently.  They didn’t put it that way, naturally, but a quick review of the data indicates that that is the essence of their plea. 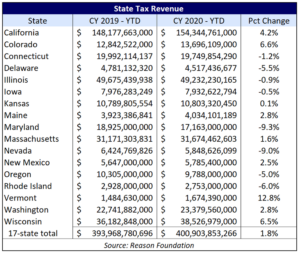 These self-described “guardians of (their) states’ fiscal health” didn’t let facts get in the way of their request for a handout from taxpayers.

Their letter says “tax revenues have plummeted” but conveniently cites nothing to back it up.  Marc Joffe, Senior Policy Analyst at Reason Foundation, has been tracking state revenues and the data gives a dramatically different picture than painted by those 17 state treasurers.

Collectively, those 17 states have a 1.8% increase in tax revenue for calendar 2020; nine states have higher revenue, and eight are down compared to 2019.

As Joffe wrote earlier this month at Reason, “There is a large range of outcomes, with some states, including Alaska and Hawaii, seeing double-digit decreases that were predicted. Meanwhile, states like Idaho, Colorado, South Dakota, and Utah experienced the largest revenue increases.” 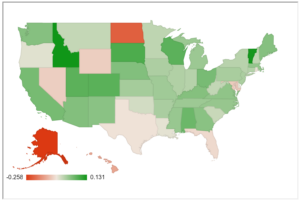 Total tax revenue for the 50 states and the District of Columbia is just one one-hundredth of one percent lower – $97 million below the $970 billion collected in 2019.

Those ‘guardians of state fiscal health’ also repeated the Keynesian notion that government spending creates a booming economy, saying “every dollar invested pays dividends for the national economy to the tune of $1.36 in GDP growth.”  Those who subscribe to that thinking conveniently ignore the consequences of government spending – current or future tax increases, which more than offsets any so-called stimulus.

Thomas Sowell said, “If increased government spending with borrowed or newly created money is a ‘stimulus,’ then the Weimar Republic should have been stimulated to unprecedented prosperity, instead of runaway inflation and widespread economic desperation that ultimately brought Adolf Hitler to power.”

Flat tax collections might seem like plummeting tax revenue in government parlance, where not getting as much of an increase as anticipated is considered a ‘cut,’ but individuals and companies routinely deal with adjustments of this nature without begging for handouts.

States and cities facing revenue declines should learn from their more efficient counterparts. Every state provides the same basic basket of services (e.g., education, social services, transportation) but some find ways to operate more efficiently, and that alone allows them to have lower taxes. 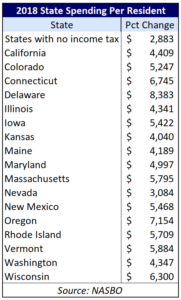 Nevada, another state that doesn’t tax income, has the lowest spending per resident among the states whose treasurers have their hands out ($3,084) but the others spend a lot more.  The next lowest spender, Kansas ($4,040), has many opportunities to reduce costs, and Delaware is the highest $8,383).

State legislators are the real guardians of states’ fiscal health. They should lead the way in reducing unnecessary spending to balance state budgets and give taxpayers a much-needed break.