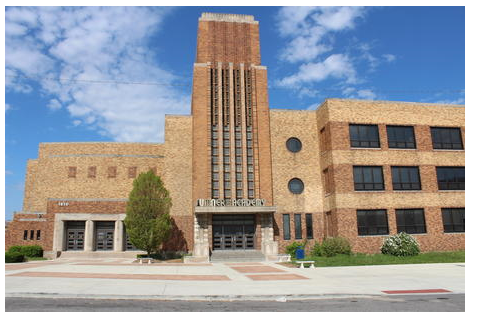 One of the purposes of KPI’s A-F grading of Kansas public schools is to find successful approaches to student success that other schools can duplicate. One such high school is Kansas City’s Sumner Academy of Arts and Sciences (USD 500). Sumner Academy is the highest graded urban high school in the state. Sumner was also recently recognized by U.S. News and World Report – more below. Although no high schools in the state earned an A, Sumner and four small rural high schools (Palco, Central Plains, Winona, and Rock Creek) merited a B. 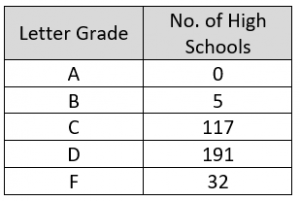 Two things are of particular note: (1) while Sumner earned a B, the other four public high schools in USD 500 each earned an F and (2) Sumner has much lower achievement gaps than their KCK peers. According to KSDE’s demographic information, Sumner Academy’s current student population of 1,001 is approximately 60% female, about 90% non-white and 78% are economically disadvantaged (free or reduced lunch). Compared to the other USD 500 high schools and other urban high schools across the state, Sumner stands apart on KPI’s A-F grading.

So what makes Sumner different? What are they doing that other high schools could emulate? First of all, the school maintains high academic standards, expectations, and performance from their students. Secondly, students must not have discipline issues. Putting those two together, it is clear that Sumner is focused on student success and has high student expectations. 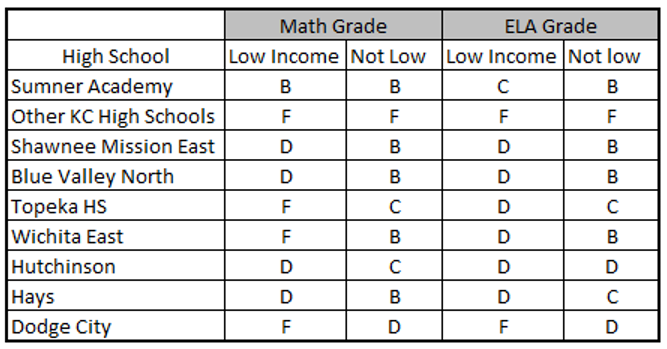 Sumner Academy is an International Baccalaureate (IB) school, which means there is a rigorous two-year curriculum that includes taking college courses. Students can also earn college credit for qualifying scores on the IB test taken when they are seniors.

Ironically, while the state board and KSDE are downplaying the importance of test scores, it is the IB test results that have helped Sumner receive such lofty accolades. Perhaps a lesson is to be learned here.  Putting more emphasis on test scores like the state assessment, not less, would motivate students AND teachers/adminstration to achieve success.

Clearly, the Sumner model can’t be replicated in all schools, but the expectations of students certainly can be emulated. High standards and expectations shouldn’t be reserved only for those extremely motivated students who attend an IB high school. Obviously, Sumner is focused on student success. That should be the driving principle for all schools. With hard work and an eye on the prize (student success) it can be attainable.

Note: Sumner Academy administrators have not responded to multiple efforts to learn more about their practices and experiences.