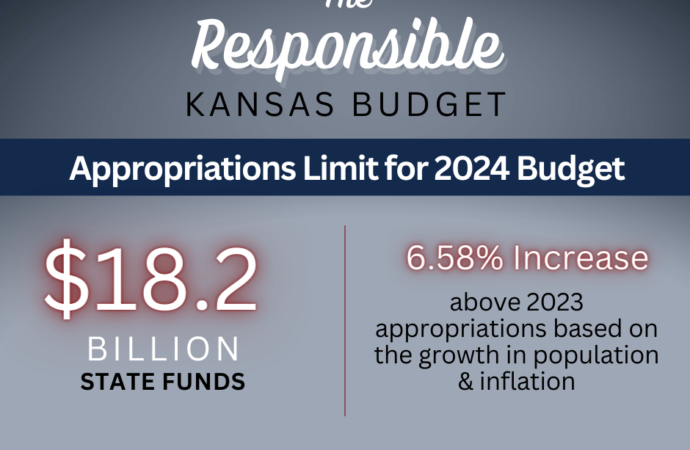 A flourishing economy and thriving people are only possible if a state government has responsible, balanced budgets. Transparency, performance-based budgeting, and tax-and-expenditure limits rein in government spending to avoid deficits. This shores up state budgets in times of revenue volatility. The question has always been how to achieve these goals and the lower taxes they allow. The Responsible Kansas Budget is a model for how to achieve this.

Last year, Kansas Policy Institute released its first edition of the Responsible Kansas Budget (RKB) for 2023. This model for accountable, sustainable budgeting proposed a limit on All Funds (state funds plus federal funds) appropriations in 2023 at $21.0 billion based on limiting spending increases to the combined rate of population growth and inflation. Instead, the Legislature approved an All Funds budget of $22.9 billion – nearly $2 billion more than the RKB. While the RKB is determined by previous years of appropriations, it isn’t a justification for that spending – and in fact, there was likely waste or things that could have been approved previously.

This year, the RKB returns, but with a new focus on State Funds instead of All Funds. This is because State Funds more accurately represent the spending under the direct control of Kansas’s government. for 2005 to 2023, state funds appropriations have increased by 138.1%, from $7.2 billion to $17.1 billion, for an average annual increase of 5.2%.

The 2024 Responsible Kansas Budget (RKB) sets a maximum threshold on the State Funds budget based on the rate of population growth and inflation during the prior year before a legislative session. This is a simple calculation of finding the growth rate of the state’s resident population and adding it to the growth rate of the US chained-CPI. In 2021, the US chained-CPI inflation increased 7.18%, and Kansas’s population growth declined 0.60%. The sum of these values, an increase of 6.58%, serves as the maximum growth rate for SGF appropriations in 2024. With a base approved State Funds budget of $17.1 billion in 2023, the 2024 RKB is a maximum of $18.21 billion. 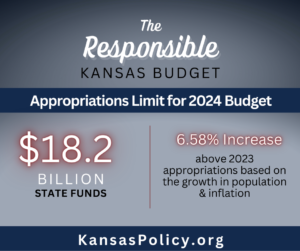 2022 showed how unpredictable the economy could be, with inflation harming thousands of families across the state. Many of the issues driving inflation are out of the hands of Kansas legislators. And yet, government spending is directly in the hands of our elected officials and could be a small way to help families currently feeling the squeeze of inflation. Responsible budgeting is a way that local leadership can shore up their governments and economies to withstand downturns. Low spending means low taxation and lower regulation, which gives people and businesses more room to flourish.

View the 2024 Responsible Kansas Budget in our report below.