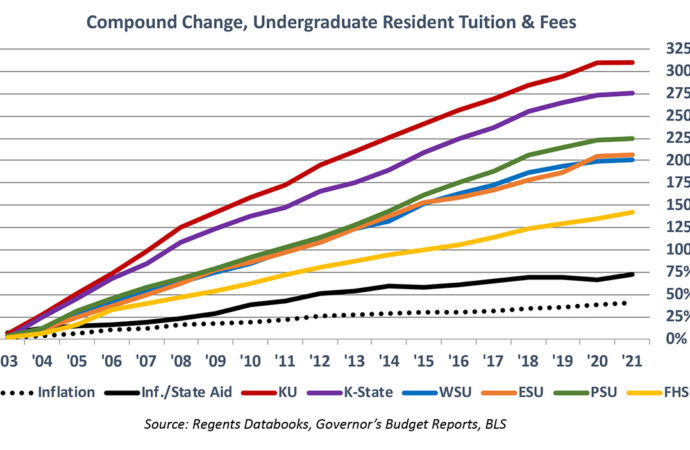 Last February, the Kansas City Star and the Wichita Eagle faulted legislators’ lack of funding for tuition increases, but analysis of university spending showed most of the blame went to the universities themselves.  Now it’s deja vu all over again – the Star and the Eagle are blaming legislators with one-sided ‘news’ reporting to push their narrative while ignoring other facts that show universities’ spending decisions are the leading cause of tuition hikes. 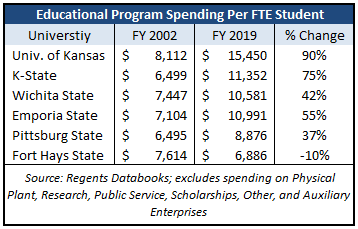 For example, the Consumer Price Index for Midwest Cities increased 36% between 2002 and 2019, but per-student educational spending jumped 90% at the University of Kansas; Fort Hays State reduced per-student spending by 10%, and Pittsburg State was in line with inflation, but the others allowed spending to increase well above inflation.  Wichita State went up 42%, Emporia State rose 55%, and K-State spending jumped 75%.  These increases are just for spending on educational programs; expenditures on Physical Plant, Research, Public Service, Scholarships, Other, and Auxiliary Programs are excluded.

Universities’ failure to control costs is a significant part of the reason for outsized tuition increases.

State funding for these six universities increased by 9% between 2002 (actual) and 2021 (budgeted).  With inflation being 41% over the same period, a 73% tuition increase accounts for state funding not keeping up with inflation.

The solid black line on the chart below shows how tuition would have increased to keep up with inflation and to make up for state funding growing less than inflation. Increases above that level are the result of choices made by university administrators and the Regents. 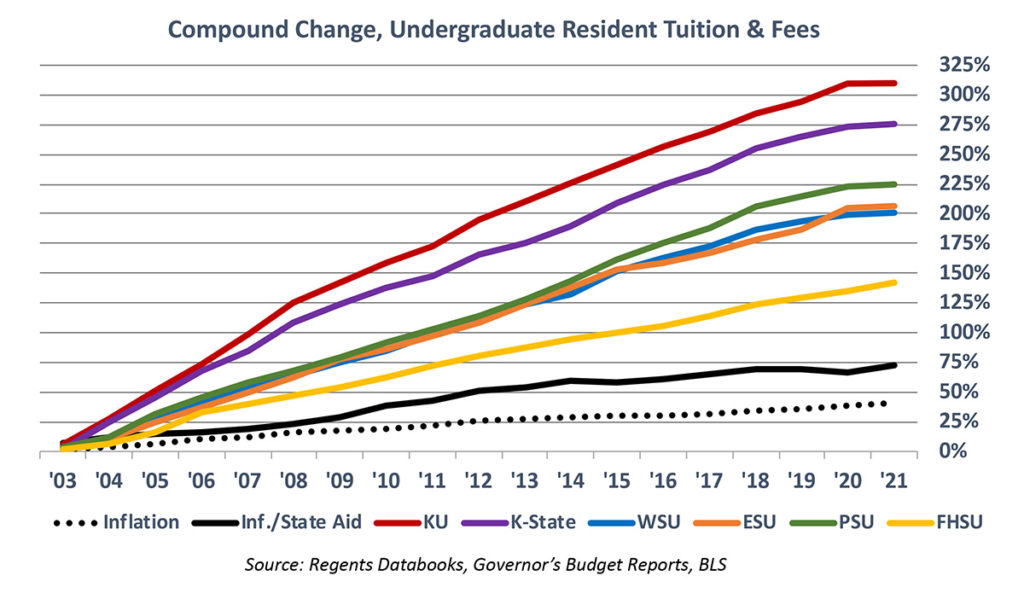 Kansas universities froze tuition for the 2021 school year, but the Eagle and Star tell readers that frozen tuition isn’t always good; they quote someone saying that temporary freezes just lead to larger increases in the near future.

But that, too, would be the choice of university administrations and not a necessity.

Purdue University just announced its 9th consecutive tuition freeze.  According to Purdue’s press release, “Room and board rates at the West Lafayette campus have seen no increase for eight consecutive years. Board rates were reduced twice — for the 2013-14 and 2014-15 academic years — and have not subsequently changed. Therefore, the total cost of room and board is lower for 2020-21 than it was in 2012-13, even before accounting for inflation, bringing Purdue’s rates from second most expensive in the Big Ten in 2012 to the most affordable — 14th — in 2018.”

It’s Purdue’s leadership that makes the difference.  University President and former Indiana Governor Mitch Daniels is committed to keeping tuition flat by making Purdue operate more efficiently.  He says, “This place was not built to be efficient. [But] you’re not going to find many places where you just take a cleaver and hack off a big piece of fat. Just like a cow, it’s marbled through the whole enterprise.”

All levels of Kansas government, including universities and school districts, should follow Mitch Daniels’ lead and begin eliminating unnecessary spending that’s marbled throughout each enterprise.