You’d never know it from media and proponents of higher taxes and spending, but according to the Division of the Budget’s July Comparison Report (Schedule 2.2), General Fund spending set a new record last year at $6.251 billion.  That’s an increase of $268 million over the previous year, with funding for K-12 Education accounting for $163 million of the increase.  The approved budgets for FY 2016 and FY 2017 will also set new records.

Spending has grown much more than most people realize (or in some cases, more than they are willing to admit) over the last twenty years.  Actual spending increased by $2.941 billion since 1995, which is much greater than inflation. 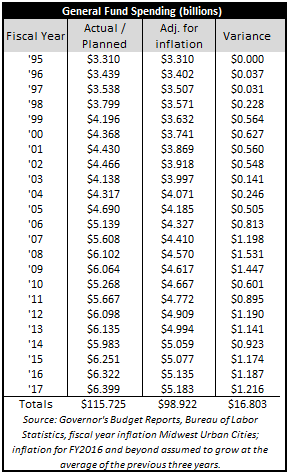 Kansas is now consistently spending over $1 billion more annually than the long-term inflation track.  Kansas would have spent $14.4 billion less over the last twenty years and the total will hit $16.803 billion by the end of FY 2017 if the inflation assumption noted in the Table holds.

So what is the basis for claims that spending has been slashed, decimated and other forms of mutilation?  In government-speak, not getting as much of an increase is portrayed as a ‘cut.’