They’re at it again. The Kansas Center for Economic Growth (KCEG) has made yet another feeble attempt to justify raising taxes and spending more money on public education. This time they try to camouflage it behind this noble, and quite obvious premise: graduating from high school is good for both the individual and the state.

In the recently published Kansas Public Education: The Foundation for Economic Growth KCEG espouses all the economic virtues of good public education. A quality education system is the driver of the state’s economy. Those graduating from high school make many more times as much money over a lifetime than non-grads. The state also benefits, savings billions on crime control, social safety net programs and public health. Who could argue with that?

But those virtues have nothing to do with the amount of money needed to adequately educate students! The Kansas Association of School Boards (KASB) originated this premise a few years ago; it was all about entitlement and it remains so with KCEG’s re-hash of their claim.

KCEG quickly lifts the mask off nobility and goes back to their old tricks by declaring (over and over and over…) that the state legislature is not investing enough in K-12 education. The word “invest” (or a form of the word) is used 26 times throughout the roughly six pages of text. They make 26 emotional appeals for “investing” while completely ignoring the real issue: whether school boards NEED more money to improve outcomes or they just WANT more money.

To remedy this they offer the same two-line refrain in what’s becoming a hackneyed KCEG tune:

Specifically, KCEG makes the claim that the reduction in funding (the term is funding when there isn’t enough money, it becomes investing when there is more) since 2009 – facilitated by the 2012 income tax cuts – has led to unacceptable graduation rates, creating a threat to the vitality of the Kansas economy.

As a matter of fact, Kansas taxpayers ‘invested’ a great deal over the lifetime of the old school funding system.  Per-pupil funding of $13,124 was 45 percent higher than the inflation-adjusted level of $9,067.  To put that in perspective, taxpayers spent invested $1.88 billion more just last year than if funding had been increased for inflation.  But for those who feel entitled to a blank check, it still wasn’t enough. 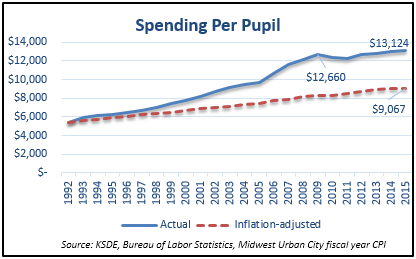 The graph below refutes their fundamental assertion by showing that graduation rates have steadily increased, regardless of funding levels. Using the most recent data from the National Center for Economic Statistics (NCES) and going back a decade, as education funding spiked pursuant to the Montoy decision, high school graduation rates maintained a steady climb, one that started before Montoy money. When funding increases were temporarily halted as a result of the Great Recession, graduation rates still went up. 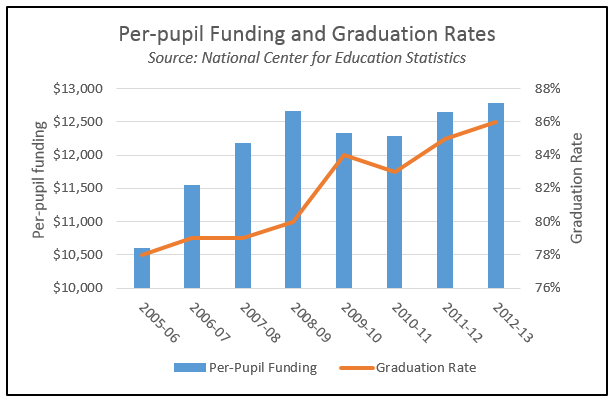 In economic terms, graduation rates appear to be inelastic.

These are but few examples explaining why KCEG’s Annie McKay and Duane Goosen refuse to debate the issues with KPI in public. They just won’t go where they can be publicly held accountable.

Kansas Public Education: The Foundation for Economic Growth provides many more outrageous points to support their position that schools need more money and the “cuts” to education have been harmful to both the education system and the state’s economy. Those points will be discussed and debunked in an upcoming article.