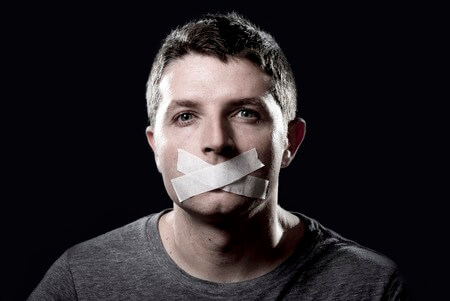 Nineteen U.S. senators are working to destroy free speech and silence dissent, defying the Constitution they swore to defend and uphold.  Senators Harry Reid, Tim Kaine, Elizabeth Warren, Bernie Sanders and fifteen other Democrats took to the Senate floor last month to demonize their ‘enemies list’ of fossil fuel companies, think tanks and journalists for having the temerity to disagree with their views.  They are also proposing a Congressional Resolution to formally disapprove of the actions of those who disagree with them.  Climate change happens to be the subject of their action, but the topic is irrelevant.  As President Harry Truman, himself a Democrat, said, “Once a government is committed to the principle of silencing the voice of opposition, it has only one way to go, and that is down the path of increasingly repressive measures, until it becomes a source of terror to all its citizens and creates a country where everyone lives in fear.”

That path of repressive measures has already been blazed.  Seventeen attorneys general representing fifteen states, the District of Columbia and the U.S. Virgin Islands formed “AGs United for Clean Power” and are threatening legal action and huge fines against anyone who declines to believe in a scientific theory which remains in dispute among respected scientists.

The Daily Signal reports, “This comes on top of U.S. Attorney General Loretta Lynch admitting that the Justice Department is discussing the possibility of pursing civil actions against climate change deniers, and that she has already referred it to the FBI to consider whether or not it meets the criteria for which federal law enforcement could take action.”

U.S. Virgin Islands AG Claude Walker issued a subpoena in April to the free-market Competitive Enterprise Institute, demanding 20 years’ worth of communications, emails, statements, drafts, and other documents regarding CEI’s work on climate change and energy policy, including private donor information.  Walker later withdrew his subpoena in the face of public backlash.  With that effort sidelined, those nineteen U.S. Senators went on the attack, proposing a Senate resolution formally disapproving the actions of those who dare to disagree with them.

Kansas Policy Institute and other organizations objected to their tyrannical methods, writing “The delicate balance of our democracy is preserved when all groups are free to speak in the public square, and ALL Americans should be concerned when agents of the government use their official offices to marginalize political foes.   We hear you. Your threat is clear: There is a heavy and inconvenient cost to disagreeing with you. Calls for debate will be met with political retribution. That’s called tyranny. And, we reject it.”

Their McCarthy-like response said our joint defense of free speech is proof of a conspiracy and that we should violate our donors’ constitutional right to private free speech by releasing their names and getting them added to the enemies list.

These police state actions have no place in our Republic, where it is not a crime to disagree with government.  Those senators and attorneys general would do well to heed fellow Democrat John F. Kennedy, who said “Without debate, without criticism no administration and no country can succeed and no republic can survive.”