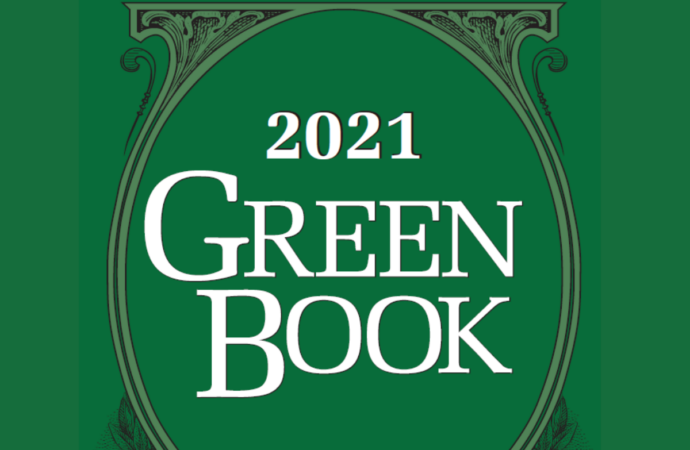 The Legislature’s override of Governor Kelly’s veto of SB 50 will finally allow Kansans to enjoy the full benefit of the 2017 federal tax cuts, and our 2021 Green Book puts the importance of tax cuts in perspective.

The relationship between the size of government and economic growth is as true today as we first wrote for the Wall Street Journal in 2012 – States that spend less, tax less…and grow more. 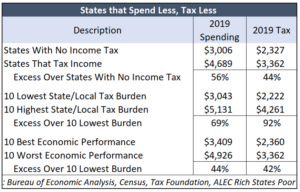 The states that tax income spent 56% more per resident in 2019 than the nine states that don’t have an income tax ($4,689 per resident vs. $3,006 per resident).[i] This represents total state spending according to the National Association of State Budget Officers (NASBO) less spending related to debt issuance and federal spending.

A third comparison finds a similar pattern, comparing the ten best and ten worst economic performance states as determined in the 2019 edition of Rich States, Poor States published by the American Legislative Exchange Council.  The states with the worst economic performance spent 44% more per resident ($4,926 vs. $3,409) and charged 42% more per resident in state taxes ($3,362 vs. $2,360.

The 2021 Green Book data refutes the notion that access to an unusual revenue stream is what allows some states to tax a lot less than others.  Texas, for example, could have all the oil in the nation and still have high taxes if they spent more.  Texas spent a lot less ($2,585 per resident), whereas New York spent $5,231.

Population and landmass aren’t factors in determining spending.  California has the most population over which to spread spending costs, but still spent $4,409 per resident, while tiny New Hampshire spent just $2,773.  West Virginia spends twice as much per resident as South Dakota, which doesn’t have an income tax ($6,841 vs. $3,434) even though South Dakota has half the population spread over three times the landmass of West Virginia.

The only thing that determines how much a state has to tax is the amount it chooses to spend providing services.  Every state provides the same basic basket of services (education, transportation, social services, etc.) but those that do so at a better price per resident are able to tax less.

Lower taxes aren’t the only benefit to state residents.  The states that spend and tax less also have superior economic growth.

The states that don’t tax income experienced 53% growth in private-sector jobs between 1998 and 2019, more than double the 26% growth in states that tax income.  The states without an income tax also had superior growth in wages (162% vs. 118%) and GDP (173% vs. 131%).   Similar disparities exist between the lowest and highest tax burden states and those with the best and worst economic performance.

Kansas continues to lag far behind the nation, which it has done for several decades.  Private-sector jobs increased just 13.3%, which is the sixth-worst rate in the nation.  Wage growth was #39 in the nation 99%, and GDP was below the national average at 127%.

High-spending states may try to claim they spend more because they provide better services.  The domestic migration numbers[iii] refute that notion, however, as people are voting with their feet in favor of states with lower taxes.

The states without an income tax had a net gain of 6.2 million people between 2000 and 2019, and those that tax income lost 6.2 million.  The gain amounts to 9% of the 2019 population.  The ten lowest-burden states gained 7 million people while the ten highest-burden states lost 8.8 million.  The ten states with the best economic performance added 8.2 million, compared to a 3.6 million loss for the ten worst performing states.

[i] Alaska, Florida, Nevada, New Hampshire, South Dakota, Tennessee, Texas, Washington, and Wyoming do not have a state income tax.

[iii] Domestic migration is the net number of people moving into and out of a state; it does not include migration in and out of foreign countries.