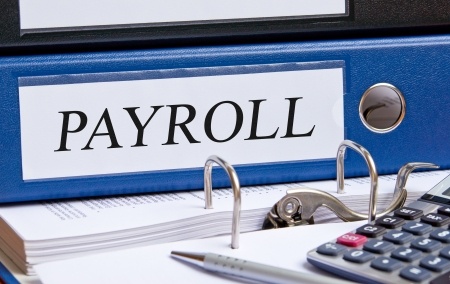 Kansas payrolls for employees at state agencies and universities totaled $2.26 billion during the 2021 calendar year, including $33.8 million on overtime. Compared to 2020, total pay was 0.3% greater while overtime was 14.2% greater. Complete records on total pay and overtime for state employees can be found on KansasOpenGov.org. 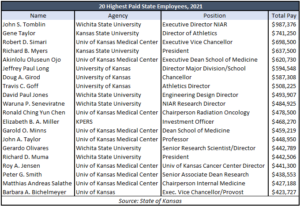 Wichita State’s National Institute for Aviation Research (NIAR) Executive Director John Tomblin topped the list this year with a total pay just under $1 million. NIAR is a government entity but works with private industry.  It’s important to note that Open Records requests do not cover privately raised funds used to pay staff at universities (mostly coaches), so the total pay reported on the Kansas payrolls is only public funds.

KU and KSU’s Athletics Directors both appear in the Top 20. Elizabeth Miller of the Kansas Public Employees Retirement System (KPERS) was the only non-University staff to make the Top 20.

There were a few large pay increases for already highly paid employees. Wichita State’s President Richard Muma had a 42% pay boost from 2020. University of Kansas Provost Barbara Bichelmeyer had a 32% increase, whereas KSU’s Athletics Director Gene Taylor had a 26% total pay increase.

Since 2014, state overtime spending has almost doubled from the $16.9 million it was. 2019’s payout of $34.9 million is the record for most overtime spending for the state, and while overtime dropped during 2020 likely due to different work conditions during COVID-19, payouts seem to be returning to their pre-COVID level. The pandemic had many compounding effects on overtime: some professions like those in the Kansas Department of Health and Environment probably saw more overtime than usual, whereas office workers working remotely saw less overtime.

The highest overtime earner was an Information Systems Manager at the Office of the Adjutant General, the head of Kansas’s National Guard, who made $119,269. That constituted 59.6% of her total pay. Of the top 20 overtime earners, nine worked in corrections, four worked at hospitals, and four worked at state universities. The only two employees in the Overtime Top 20 who worked under the Adjutant General were also in the top three earners.

The payroll and overtime records are obtained from the state in Open Records requests annually and are reported directly. Other breakouts, including KPERS Pension payments, payroll from the Kansas Turnpike Authority, and payrolls for various cities and counties across the state can be found on KansasOpenGov.org.