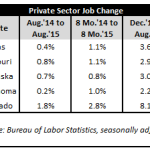 Bureau of Labor Statistics releases for August show Kansas maintaining its tie with Missouri for the second highest seasonally-adjusted private-sector job growth rate (1.1%) among regional peer states when comparing the first eight months of 2015 with the same period of time in 2014.

Kansas performs even better regionally when looking at the period starting in December 2012—when Kansas implemented tax reform—and ending with the aforementioned most recent, August 2015 numbers. As the adjacent table shows, Kansas’ 3.6% growth rate over the period is second alone, trailing only Colorado’s 8.1%.

Our customary shorter-term but deeper dive into the regional jobs numbers by industry sector continues to highlight our contention over the course of our last three jobs updates that industry-specific fluctuations oftentimes beyond a state’s control can exert undue influences on that state’s overall job growth picture relative to other peer states.

This is made particularly clear when looking at the aerospace and motor vehicle manufacturing industries. The aerospace industry is only large enough to meet minimum reporting requirements in Kansas and Oklahoma. Yet its globally-driven developments (declines in this case) temper down overall job growth numbers for Kansas and Oklahoma while not affecting reported numbers for the rest of the regional states highlighted. Similarly, the motor vehicle manufacturing industry is only large enough to be reported in Missouri. Yet, substantial growth in this industry continues to bolster Missouri’s overall jobs growth picture but is essentially a non-factor elsewhere in the region.

The mining and logging industry meets reporting requirements in all of the states shown except for Nebraska. However, it includes oil and gas extraction, a sector whose growth is subject to global pricing. The transportation equipment manufacturing industry—which is large enough to be reported for all states—is similarly not confined to unique policy environments. Growth in this sector is more heavily tied to national or global demand for the particular types of equipment manufactured in each state.

Collectively, the four industries discussed account for less than 7% of each regional state’s economy. Removing these sectors and looking at job growth in “all other” industries (more than 93% of each state’s economy) gives a far different look to the regional job growth picture, with Kansas leading three of its four neighboring states.

This underscores the importance of understanding how single, raw, and preliminary jobs numbers do not tell the whole story in terms of a given state’s economic health and outlook. One must examine many moving parts to arrive at an understanding of the greater whole. Check back for next month’s update.