In its 2021 budget report, Douglas County says, “Acknowledging that COVID-19 has had a significant economic impact for many, the mill levy remains flat….” But they don’t mention there is a 4.8% property tax hike in this year’s budget. That’s the epitome of the Kansas property tax honesty gap.  Local officials speak only of mill rate changes but ignore the backdoor increase from valuation changes on property. 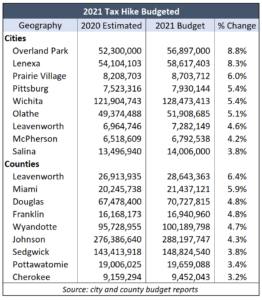 The Johnson County budget book touts a 1.7% reduction in the mill rate, but there’s a 4.3% property tax increase buried in the 445-page document. That’s a 6% honesty gap – pretending taxes are going down 1.7% when it’s really a 4.3% increase.

These aren’t isolated incidents.  Local officials all across Kansas are telling voters they are ‘holding the line’ on property taxes. But our analysis of 50 of the largest cities and counties show an average property tax increase of almost 4% coming this year; that’s about four times the inflation rate, while many Kansans are struggling to make ends meet.

The adjacent table lists the most egregious examples, starting with the city of Overland Park at 8.8%.  The city of Lenexa is a close second, at 8.3%.

Last year, the Kansas Legislature overwhelmingly passed Truth in Taxation legislation to close the honest gap.  But city and county officials opposed it, so Governor Kelly saved them from having to be honest and vetoed the bill on the last day of the session, with no opportunity to override.

Utah and Tennessee have had Truth in Taxation laws in effect for more than three decades, which have proven to keep taxes lower.  For example, Utah’s effective property tax rate dropped by 7.5% between 2000 and 2018,  while the tax rate increased by 22% in Kansas.

Under the Kansas bill, local elected officials must vote on the entire property tax increase they impose, regardless of whether the increase results from valuation changes or mill rate changes.  Each year, mill rates would be automatically reduced to a ‘revenue-neutral’ level that produces the same property tax revenue to each city and county as they collected the year before.  If they want to raise the revenue-neutral mill rate, they must notify taxpayers of their intent and hold public Truth in Taxation hearings to accept taxpayer input.  Afterward, they must vote on the entire tax increase they decide to impose.

The Legislature needs to take this up again this year and put it on Governor Kelly’s desk early in the session with plenty of time to override her inevitable veto.