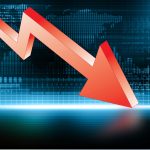 County economies among the slowest in the nation

Like students receiving their semester report cards, counties in the U.S. recently received a similar assessment on their economic performance. Unfortunately, rather than being near the top, eight out of the ten most populous Kansas counties are among the slowest growing economies in the nation. In reviewing official estimates, it seems counties with higher rates of government growth tend to have slower economic growth.

The Bureau of Economic Analysis released County Gross Domestic Product adjusted by inflation (Real GDP) for 2018. The table below highlights economic and government change of Kansas’ ten most populous counties and ranked them out of all U.S. counties (3,000+). As an example, the largest Kansas county, Johnson County, saw private sector growth but ranked in the 37th percentile nationally. The closer to the 100th percentile, the better the county performs compared to peers. In other words, nearly 2/3 of counties in the country GREW FASTER than Johnson County from 2017 to 2018. How many large Kansas counties are below the 50th percentile in private sector growth? Eight. Additionally, how many large Kansas counties are above the 50th percentile in government growth? Seven. 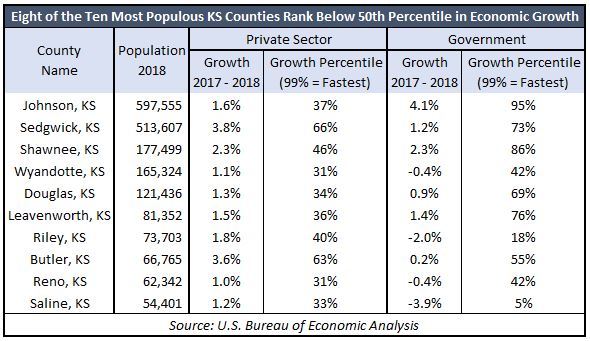 With Butler and Sedgwick counties appearing as outliers, there’s a trend in this economic snapshot. In Kansas, if a county’s government growth is high relative to neighbors, their economy tends to underperform and vice-versa. While complicated, there’s evidence of a negative relationship between government and the private sector in Kansas, and the nation at large. Moreover, the fastest 10% of county economies nationwide also have a slower growing public sector (under 50th percentile in government growth).

Private sector resources power government services. In a time of economic expansion, when the economy slows and the government expands, there are too many diverted resources. Perhaps Kansas counties could see faster economic prosperity by trying to provide better public services at better prices. We already know that among the top five largest counties, government spending ranges from $500 per person to $1,300. There’s room for government efficiency to help spur economic opportunity and growth.

All it takes is a willingness for Kansas county governments to spend within their means. Like the adage says, too much of anything is bad. While the government is necessary for a responsible citizenry, too much of it can hinder individual freedom, cooperation, and prosperity.