December’s private-sector jobs numbers from the U.S. Bureau of Labor Statistics are available, and they show some positive growth in Kansas. To echo previous blogs in this series, there is an obvious short-sighted limitation to looking at jobs numbers for a single month in 2014 and comparing them to that same month in 2013. Namely, the numbers for a given month may be outliers when compared to a longer-term trend. What’s more, the numbers—especially in their early release stages—may be subject to upward or downward revisions the following month. However, even when taking potential anomalies into account (e.g. February-March, September-October), the graph below shows clearly that Kansas continues to gain ground and approach parity with its peer states that tax income. 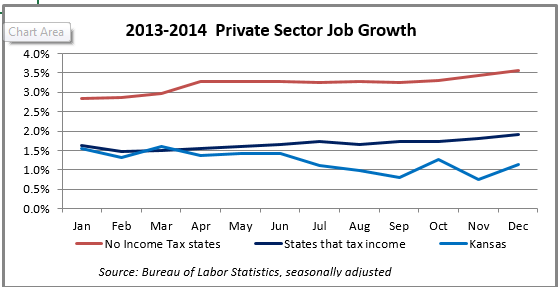 Looking at job growth in the context of Kansas’ 2012 tax reforms illuminates this gaining of ground even further.

Check back for January’s update.