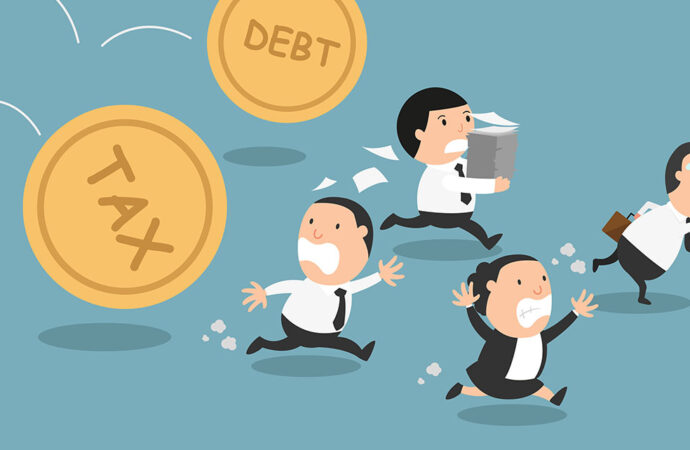 The legislative session is out, and election-year attacks are in. This week, Kansas Attorney General Derek Schmidt, the presumptive GOP nominee for governor, announced his plan to eliminate the state income tax on retirement plans. Governor Laura Kelly made the cut out to be a gimmick that will “take us back to the Brownback era of fiscal irresponsibility and underfunded schools.” Politicians in both parties are entitled to their opinions, but Kelly’s doesn’t reflect the truth. 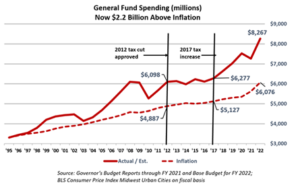 The budgetary problem with Brownback’s tax cuts amounts to a fourth-grade math problem – you cannot massively cut revenue AND increase spending.  In 2012, the Legislature increased spending by $431 million; between then and 2017, when the Legislature enacted the largest tax increase in state history, spending went up another $179 million.

The deficits came about because Brownback, Democrats, and some Republicans would not support opportunities to reduce the cost of government.  It’s not about cutting services but reducing the cost of providing services.  Our 2012 analysis showed that a one-time efficiency savings of 8.5% would have balanced the budget and allowed spending to grow at the same pace as revenue thereafter.

As told in our 2022 Green Book, states that tax income spend 52% more per resident than states that don’t – despite the fact that every state has to provide the same services to citizens – public safety, social programs, and more. In 2012, Kansas spent 37% more than states that don’t tax income; in 2022, Kansas spent 55% more. If it’s possible for these states to spend less and provide the same services, then it’s possible for Kansas. 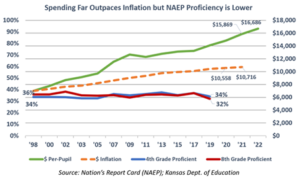 School officials and courts may believe funding was too low, but every year, many states spend less than Kansas and get better results.

Schmidt’s proposal would be especially welcome: according to Kiplinger, Kansas is ranked as the third least tax-friendly state for retirees across the entire country.  Private retirement plans like IRAs, 401ks, certain Social Security benefits, and out-of-state public pensions are all fully taxed.

Eliminating this tax when in-state public sector pensions are already not taxed would make the system more equitable and make it easier for retirees to stay in the state instead of moving elsewhere. Between 2000 and 2021, Kansas lost 185,000 people via domestic migration. States that tax income lost 6.75 million people in domestic migration, whereas states that don’t gained 6.79 million new residents

There’s plenty of room to “right-size” spending to allow for tax cuts. Evaluating carryover cash reserves and continuing tax transfers to different branches of the government despite new taxes or tax increases are two ways to make the money Kansas already has last longer and not go to waste. Strict adherence to priority and performance-based-budgeting and more thoughtful approaches to discretionary measures certainly help too.

Phasing out the retirement tax would help make Kansas a more livable state and prevent moves because of a high tax burden. It’s not partisan to balance the budget while making the state more affordable, but distorting the truth to keep taxes unnecessarily high is decidedly partisan.