Even by KASB standards, school operating spending is $3.9 billion ahead of inflation

A recent blog post by the Kansas Association of School Boards (KASB) Associate Executive Director Mark Tallman says “Total school district funding is, in fact, at an all-time high, expected to top $6.1 billion this year” but “…the part of school funding available for day-to-day operating costs is not keeping up with inflation and enrollment.” There are several misleading aspects to his statement and the data does not support the intended message, but let’s first give credit for the courage to contradict education officials who say funding has been cut. Bravo!

KASB’s definition of operating costs does not comport with the official definition used by the Kansas Department of Education or the U.S. Department of Education1, but for the sake of argument, let’s say that it’s correct. Let’s also assume that their definition of current operating funding represents the amount needed to efficiently operate schools and achieve the required outcomes, even though the facts refute any such claim.

By increasing the KASB-defined operating spending for inflation (the calculation for 2006 is $6,928 times (191.41 ÷ 185.14) = $7,162), we find that schools received a lot more money each year than if KASB’s 2005 amount had been increased each year for inflation. The margin of difference is getting closer over the next two years (if one doesn’t count all of the funding), but funding will have exceeded inflation by almost $3.9 billion since 2005. 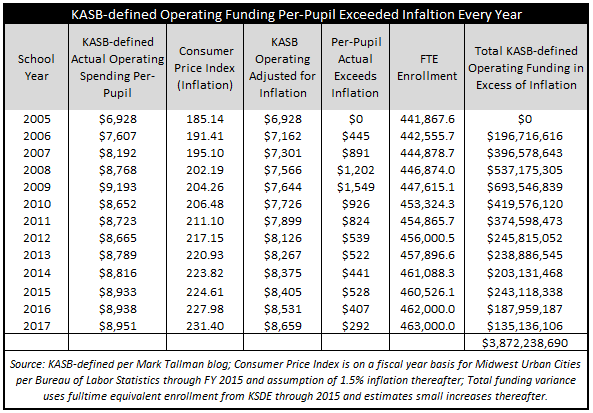 The Kansas Constitution says the legislature must make suitable provision for the finance of public education; it does not say that schools must be given whatever they want to spend or that efficient use of taxpayer money cannot be taken into account. The honest truth is that no one knows what schools need to achieve the necessary outcomes while making efficient use of taxpayer money, because no such analysis has ever been undertaken in Kansas. We do know, however, that every Legislative Post Audit has found schools to be operating inefficiently and school superintendents openly acknowledge that they choose to spend more than is necessary in many circumstances. We also know that school districts haven’t even spent all of the money they’ve received over the last ten years, as about $400 million has been used to increase operating cash reserves. 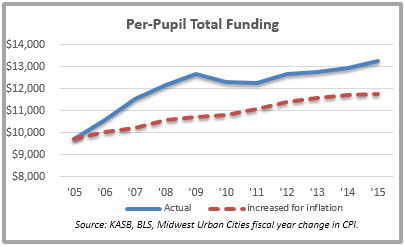 There may be ways to demonstrate that today’s funding has less buying power than a particular point in time but that doesn’t mean that each year’s funding didn’t keep up with inflation and enrollment – as shown above, per-pupil funding as defined by KASB was $3.9 billion more than an inflationary increase.

The gap is even greater for total funding, which would have been $6 billion less over the last ten years if per-pupil funding for the 2005 school year had been increased each year for inflation. School districts received large funding increases beginning in 2006 from a Supreme Court Montoyruling based on a cost study that has since been abandoned by the Supreme Court in Gannon. 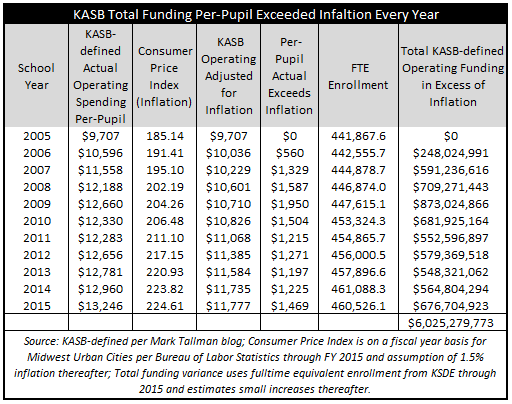 The Shawnee County District Court may believe that schools are not adequately funded, but they ignored the Kansas Supreme Court in arriving at what amounts to little more than a political perspective. School funding has been growing much faster inflation and enrollment, but for some, it will never be enough…and they will continue to use taxpayer money to fund KASB justifications (and attorneys) for their monetary demands.

1KSDE and the U.S. Department of Education say operating expenditures “…do not include equipment (700 object codes), Capital Outlay or Bond & Interest. [700 object codes include expenditures for acquiring fixed assets, including land or existing buildings; improvements of grounds; initial equipment; additional equipment; and replacement of equipment.]”  The KASB definition also excludes Food Service and employee retirement costs but they don’t disclose that their definition is not the official definition and it also does not comport with the Kansas Supreme Court, which says all funding sources, including retirement costs, should be considered as part of adequate funding.