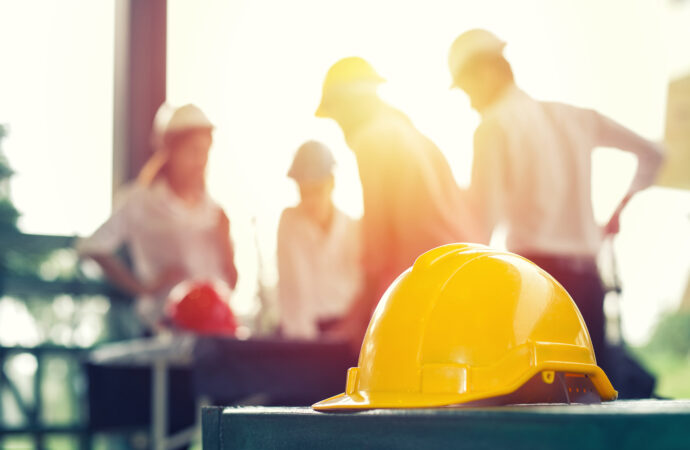 Rural towns are some of the most resilient communities out there, with members often banding together and supporting one another through struggles. To remain strong through the next century, rural communities need public policies that allow this resilience to continue as mechanization and depopulation trends likely continue.

The 2021 Power Up & Go report by the Kansas Sampler Foundation and Kansas’ Office of Rural Prosperity interview dozens of “local champions” – young people between the ages of 21 and 39 who opted to live in rural areas – about their struggles and hopes for sustaining rural life. Perhaps the biggest problem is the recent population shift. A 50-year forecast of Kansas population from 2014 to 2064 notes that there will be an overwhelming shift of Kansas’ population to suburban counties like Johnson and Pottawatomie, while some rural counties decrease in population by as much as 94.2%. There are several reasons for this decline. 32.3% of Kansas’ population 65 years and older are located in rural counties, with the share of older people living in rural counties growing by 6.6 percentage points nationwide between 1980 and 2016. Innovations in farming over the last half-century have made it so that jobs that once took a full team of farmhands could be done by one machine-accessible to most farmers. This simplification of work combined with the creation of new jobs (in particular, those for young people or recent college graduates) in urban centers such as the Kansas City Metro, Wichita, or college towns means that rural counties have difficulty sustaining a community over time.

However, Kansas has a wide range of different policies at the state and local level which could incentivize and sustain rural business growth and healthy living. In a series of multiple blog posts, KPI will be tackling issues such as tax policy, business regulation, utility costs, and other factors as related to rural development. This post addressed internet access and broadband expansion across the Sunflower State.

The Internet has completely revolutionized how people communicate and do work, as exemplified by the adaptation of the economy during the COVID-19 pandemic. Wider operable ranges for faster internet open the opportunity for entrepreneurs to work remotely in rural communities. It also mends the gap in communication and issues with transportation many in rural Kansas face. Videoconferencing with healthcare professionals has helped support rural populations during the COVID-19 pandemic. The most direct way the government can facilitate internet development across the state is through developing broadband infrastructure. This could vary from developing fiber optics networks, wireless 5G capabilities, digital subscriber lines connected to telephone lines, and more. A 2020 FCC commission analyzing 5G deployment areas determined that 15 percent of Kansas’ population over 69,630 square miles of the state (85 percent of the state!) would be in areas of interest for broadband infrastructure development.  These are areas that likewise could be targeted with broadband expansion policies. 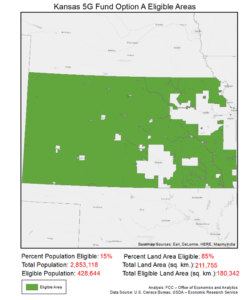 The first step is Kansas’ internet agenda is to prioritize long-term internet sources. Many factors determine an internet sources’ (i.e., fiber, satellite, etc.) strength, such as ease of deployment and infrastructure, how scalable it is, how long it will last before it needs to be replaced or is eclipsed by another potential source, and how fast the internet itself is. In terms of all of these factors, fiber internet consistently demonstrates its power as the foremost broadband source. While DSL and Cable internet sources lose 94% of their signal over 320 ft of cable, which impacts the quality of internet, fiber only loses 3%, meaning it could provide the best quality over long distances (particularly rural areas). Continually increasing processing power accompanies fiber, which due to its form as a signal within a wire, sees more resilience to natural phenomena and slow rates compared to cable, wireless, and satellite services.

The state of Kansas, however, has waste issues tied in with their broadband spending. This past year, the state outlined that over the next decade it will spend $85 million on 25 Megabits per second download and 3 Mbps upload speed-standard internet, which is sub-par to other competitors. This inferior product developed over a significantly long amount of time is an early signal for inefficiency. Since 1997, the Kansas Universal Service Fund has funneled $1.2 billion into landline providers. The state is subsidizing outdated and ineffective telecommunications sources to little benefit in the long term. For instance, Wilson Telephone Company received $20,557,017 in funds since 1997, yet much of the area around Ellsworth in their territory has an unserved housing density between two and ten houses per square mile. Furthermore, the fund only supports voice service, which is severely limited in scope. Kansas needs to adopt policies to instead promote independent development and competition between providers to accomplish the same goal of connecting the state without the administrative hassles and spending.

These fees need to be reformed so that there is a competitive bidding process that not only supports only the highest quality of broadband expansion, but is the most effective for taxpayers. Just this year the FCC reformed their own federal-level bidding process to be competitive, thus saving a projected $7 billion dollars. This reform replaced a highly inefficient system in which each application was hand-reviewed and only turned out slightly better results than if the money was distributed randomly between applicants. Competition brings the price down, the service quality up, and gets quality internet to the rural populations who need it.

Building exclusively modern broadband infrastructure ensures that the installations won’t need to be as continuously updated as if they were more dated technologies. One of the biggest reasons why so many rural telephone companies keep installing older infrastructure instead of fiber is the fact that fiber is relatively expensive to provide for a small rural populace. As of 2017, the average cost of laying fiber cables was $27,000 per mile. This explains why fiber deployment in urban areas has historically been easier in dense, urban areas compared to rural areas. Even in relatively compact rural towns – adjacent to the KC Metro – such as Spring Hill, the cost to pass the fiber cables through individual homes was $1,700.

While these costs are high, there’s an assortment of different strategies local governments could take to promote broadband development. One is coordinating the installation of private fiber infrastructure with other public infrastructure plans. For instance, as local governments are installing underground equipment, it would be a great time to also invite private companies to install fiber using the same first steps. This could be something as easy as a notification to local partners and cooperative measures. Creating a straightforward licensing and approval process for developers also reduces the costs over time. This could see a lot of momentum in reforming the Kansas Department of Transportation’s Right of Way policies, which create a form of a franchise agreement between fiber companies who want to install infrastructure near public works, mainly highways. KDOT could speed up their approval process for these projects to promote development. Broadband developers frequently cite petty partisan squabbles holding up initiatives as one of the most frustrating issues to work within development.

Public policy can incentivize or make this development easier, but government bodies should be aware of potential waste and mismanagement. During the Great Recession, the federal Rural Utilities Service spent $3 billion to develop rural infrastructure, yet 40% of their approved projects were never initiated, with half of those original projects never used all of the funds they were granted. While largescale federal broadband infrastructure projects can put large amounts of money into prospective visions, the scale of these projects make them bulky and less efficient than state and local level initiatives which could be facilitated in Kansas. There are also simpler and more innovative solutions possible.

One is utilizing TV white spaces. In brief, TV channels operate on a spectrum with a distance between different channels to avoid overlap. In more populated areas, the distance between channels is usually smaller because there are more local channels, however, as some of these channels drop off in rural areas, there is a large amount of “white space” in the spectrum that internet providers could take advantage of. As recently as 2017, Kansas City area libraries were using white spaces to provide free Wi-Fi for students to complete their homework. A 2020 Notice of Proposed Rulemaking by the FCC to open up white space was a good sign of further development. The one careful step that governments need to take when utilizing white space is to ensure that when dedicating white space, they don’t accidently interrupt or intrude on the spectrum spaces of established channels.

The opportunity of broadband expansion opens the door for local business opportunities. From 1996 to 2019, broadband developers were responsible for $1.78 trillion in capital investments towards greater internet access. Microsoft’s Airband Initiative is a great example of this. The project brings together the necessary private sector capital and public sector expertise and government coordination. Microsoft’s commercial partnerships with the Kansas providers Nextlink and Wisper have helped expand access to 1 million people in Kansas and its neighboring Midwest states. Governments should take advantage of these opportunities for strong, external support and expertise. Some electric co-operatives have also partnered with broadband companies to combine their expansion plans.

At the same time, local governments could reduce barriers to deployment to further facilitate installations. One simple way is by keeping pole attachment rates accessible and affordable for development. Companies must pay a fee for space on a utility’s telephone poles, so it represents a cost to internet companies expanding connections. Kansas should adopt legislation similar to that proposed in our neighbors Oklahoma and Nebraska to moderate pole attachment rates. Nebraska’s bill establishes reasonable FCC standards for pricing and contracts and prevents utilities from imposing absurd standards on pole rates. Oklahoma’s bill introduces a cap on pole attachment rates and more equitable terms between pole owners and internet companies buying space on their poles regarding damages to the poles. Like a landlord and a tenant, creating transparent and competitive contracts is a good way to boost rural development. However, Kansas should not try to impose caps for fear of negatively impacting the natural processes of the market.

Broadly speaking, creating healthy tax environments that bring new internet businesses in via healthy tax rates is key for bringing expansion to Kansas. In legislation, the state could streamline the application processes with internet providers and make sure regulations are not overly burdensome on the internet companies building infrastructure for rural Kansans. Instead of trying to pick winners and dictate success, the government should step back and let people like local champions have room to provide for their communities.