Five things to know about K-12 education in Kansas 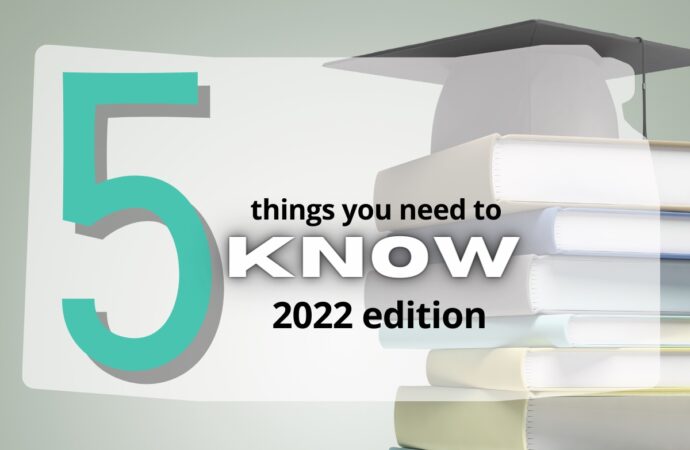 Educational opportunities in Kansas can be amongst the best in the nation if we focus on students instead of institutions, learn from the example of states like Florida, and move past the partial truths and talking points of “supporting public schools.”

State assessment tests administered by the Kansas Dept. of Education (KSDE) reflect much lower achievement than parents have been led to believe.  The 2022 state assessment shows more students are below grade level than are proficient in Kansas.

High school results are worse.  For example, 46% of 10th-graders are below grade level in math and only 20% are proficient.

Results vary among districts, but low achievement is a universal problem across Kansas.  Even in Johnson County, 34% are below grade level and only 31% are on track for college and career.

Half or more of 10th-graders in some counties are below grade level in math, including Shawnee, Wyandotte, Sedgwick, Finney, and Reno.  Less than one in ten are proficient in Wyandotte and Finney counties.

Achievement was on a steady decline before the pandemic, and now it’s worse.

#2 – College readiness is low and declining 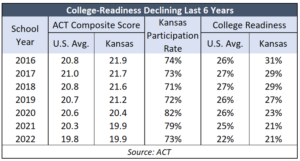 was 79% and this year it dropped to 73%.  The Kansas Department of Education says participation impacts scores because students who don’t plan to attend college are less likely to take the ACT test; a decline in participation should have prompted a higher score in 2022, so the Kansas average score is likely lower than stated.

Only 21% of Kansas students did well enough to be considered college-ready in English, Reading, Math, and Science on the 2022 ACT.  That’s down from 31% in 2016 and below the national average for the second consecutive year.

State average scores are skewed by two major factors – demographic differences among the states and participation rates (the percentage of students taking the ACT in each state). 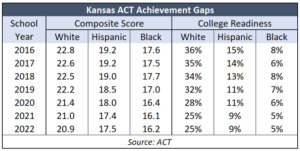 ACT doesn’t publish income-based demographics but the achievement gaps in Kansas between White, Hispanic, and Black students are significant and persistent.  Only 5% of Black students are college-ready compared to 9% for Hispanic students and 25% for White students.

The Kansas Association of School Boards routinely declares Kansas to be among the ten best states for student achievement, but that has never been true.  In fact, Kansas hasn’t had a single Top Ten ranking on any of the demographic measurements on the National Assessment o 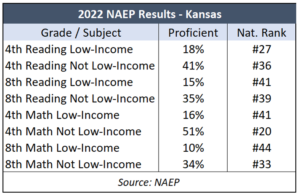 Each of the eight proficiency levels in the adjacent table is lower than in 2003, and only two other states – West Virginia and Delaware – share that poor performance.

By the way, NAEP is considered the gold standard for comparing performance across states by education researchers.

#4 – Spending money does not cause achievement to improve

Contrary to claims by school officials, Supreme Court judges, and others, spending more money does not cause student achievement to improve.  Per-pupil spending has grown much faster than inflation over the years, but achievement on the ACT and NAEP declined a bit.  If per-pupil spending had been increased for inflation, it would have gone from about $7,000 in 1998 to about $11,600 this year, but KSDE estimates spending for the school year ended June 30, 2022, was $16,686. 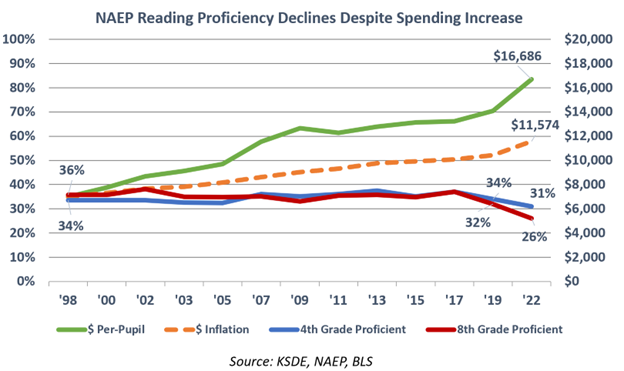 Twenty-seven states had the same or better NAEP 8-score composite in 2022 than Kansas and spent less per student (4th-grade and 8th-grade Reading and Math for low-income kids and students who are not low-income compared to 2020 spending per U.S. Census, adjusted for cost of living). 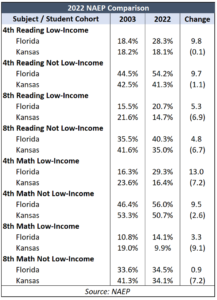 As explained in “Giving Kids a Fighting Chance,” Florida educators, parents, and legislators attribute their gains to a combination of choice, transparency, and accountability.

Florida adopted an “A through F Grading System” so parents can see a letter grade on every public school and track its progress; the Kansas education lobby, as shown earlier, distorts achievement to make parents think it is much higher.

Florida has accountability measures like its 3rd-Grade Reading Initiative.  The 3rd grade is critical because, in the first three years, students are learning to read; thereafter, they are reading to learn.  Florida law specifies reading requirements for third-grade students and promotion to fourth-grade.

In Kansas, local school boards and administrators are not held accountable for improving student achievement or for spending money in students’ best interests.  State assessment results show many students are persistently below grade level and state audits have shown money isn’t being spent as intended by the Legislature, yet there are no consequences imposed.