Proficiency plummets to historic lows on 2022 NAEP in Kansas 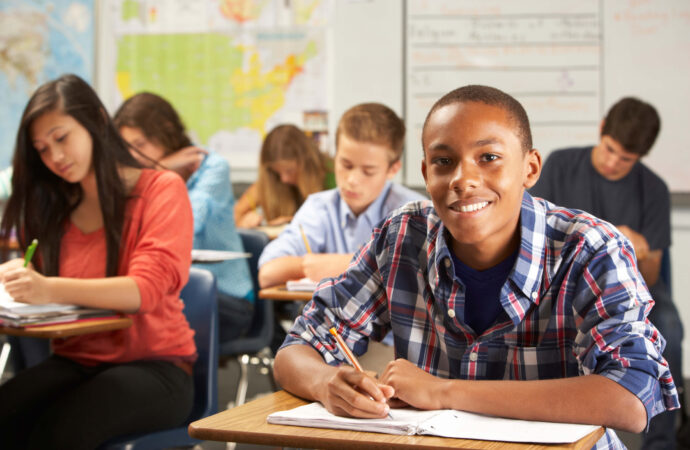 Reading and math proficiency fell to historic lows on the 2022 NAEP test, with just a third of 4th-grade proficient and only a quarter of 8th-graders.  The National Assessment of Educational Progress (NAEP) is administered by the U.S. Department of Education and is considered the gold standard of student achievement measurement in the nation.  A NAEP study last month of 9-year-olds showed the biggest learning loss in 50 years nationwide.

Only 31% of 4th-graders in Kansas read proficiently, and 26% of 8th-graders.  Kansas first participated in the NAEP reading assessment in 1998, when proficiency was 34% and 36%, respectively. 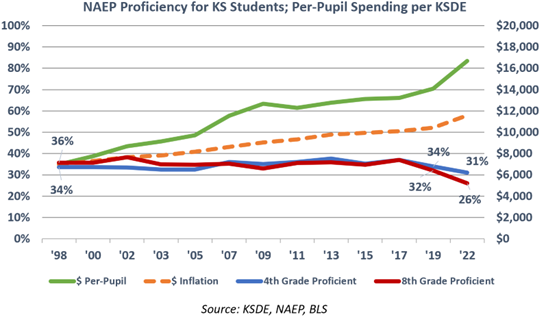 Income-based educational discrimination remains evident.  The gaps narrowed a bit in three of the four income-based comparisons, but only because proficiency fell more for students who are not low-income than those who qualify for free or reduced lunch.  The 4th-grade math gap widened from 32 points to 35 points. 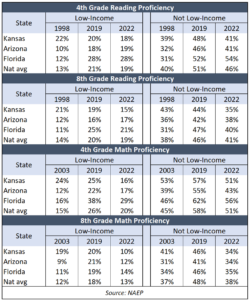 Some degree of decline from pre-pandemic levels was expected, and proficiency generally declined across the nation.  But the states with the most robust school choice options did better than Kansas and the national average in several instances.

In Arizona, low-income reading proficiency improved in both grades from 2019.  Florida held the same level with low-income students in the 4th grade and notched a 2-point gain for those who aren’t low-income.

It’s also noteworthy that Arizona, Florida, and the national average are above 1998 proficiency levels in reading and 2003 levels in math. Kansas is below its 1998 and 2003 levels in seven of the eight measurements.  (Kansas first participated in the reading assessment in 1998.  2003 was the first year that most states took the math assessment.)

Kansas’ national rankings for the eight primary proficiency measures range from #20 to #44.

The eight-score composite (average of all scores) gives Kansas a national rank of #36.  The top five states are Massachusetts, Florida, Mississippi, Indiana, and Wyoming.

The 2022 NAEP results are just the latest example of persistently low achievement in Kansas.  Only 21% of Kansas graduates who took the ACT are college-ready in four core subjects, and the state assessment shows more students are below grade level than are proficient.

As we explained in our new book, Giving Kids a Fighting Chance with School Choice, the Kansas public education system – management, not teachers – prioritizes the institutional interests of the system over student needs.  The book tells one story after another of education officials consciously deceiving parents and legislators…de-emphasizing academic improvement…and even ignoring state laws designed to improve achievement.

That’s why nothing will change until parents put enough pressure on the Legislature and the Governor to pass money-follow-the-child legislation so every parent can send their children to the school that they believe is best for them.