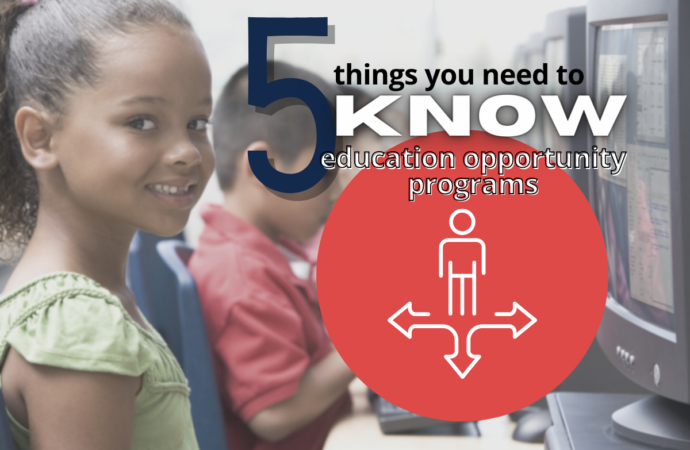 Money-follow-the-child programs tax credit scholarships for low-income kids and education savings accounts for students below grade level – have generated a lot of good questions.  There is also a fair amount of misinformation going around.  We provide explanations below for five of the most frequently raised issues, but please let us know if you have other questions.

Tax credit scholarships would be available to every student receiving free or reduced lunch via a federal program that has existed for years.  People make contributions to scholarship-granting organizations (SGOs) and get a 70% state tax credit for the amount contributed.  Parents of eligible students can apply to any of the dozen or so SGOs in Kansas.  A scholarship from the SGO can be up to $8,000 annually for private school tuition. This program initially took effect in 2015 and aims at the lowest-income children in the lowest-performing elementary schools in the state.   We’re trying to expand the program so all low-income kids can qualify.

Education Savings Accounts (ESAs) would be available to students who score below grade level on the state assessment, are diagnosed with dyslexia,  or have high absenteeism.  A qualifying student would have an ESA account established by the State Treasurer, funded with about $4,500 annually; parents can use the money for tuition, fees, books and supplies, transportation, tutoring, and other specified services.

Why are these programs necessary?

School funding was $2 billion higher in 2020 than if the Legislature increased the per-student amount for inflation since 1998.  Student achievement, however, has remained stubbornly low. 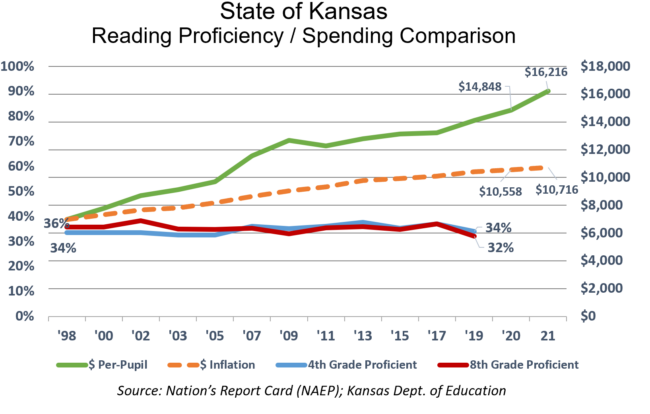 The ACT test also shows achievement is lacking; only 23% of Kansas graduates taking the 2020 ACT test were considered college-ready in English, Reading, Math, and Science.

Parents and legislators see that achievement remains low despite providing billions more in total spending, including at-risk money they targeted specifically to academically- and financially- challenged students. At-Risk funding is higher by a factor of seven since 2005, but achievement gaps remain wide and are getting worse.  Since schools are under the State Board of Education’s control, money-follow-the-child programs are legislators’ best option to give kids a fighting chance for the education they deserve.

The U.S. Supreme Court Espinoza decision struck down the bigoted “Blaine Amendments” in 2020 thereby removing the persistent threat of these prejudiced provisions from continuing to harm Kansans.  What’s more, the Kansas tax credit scholarship program has been in place since 2015; its constitutionality has not been challenged, and that says something, given the litigious nature of Kansas public schools.

Legislative proposals fully fund the school funding formula per-student amounts, estimated by the Kansas Department of Education to be $16,216 this year.  If a student takes advantage of the ESA opportunity, the district no longer incurs the cost of educating that student but retains part of the per-student funding for three years.  After three years, the impact on the school district is no different than if the student moved out of state or to another school district.  Districts would still be funded based on the number of students they have.

Much of the concern over money-follow-the-child programs revolve around accountability and oversight for private schools.

Parents must first understand that there is no real accountability for public schools, as in, there is a consequence if achievement doesn’t improve.   While parents can remove students from private schools that don’t perform, they have no such option with the school assigned by their zip code if they can’t afford to move.  Also, kids who take advantage of these opportunities may only do so in accredited private schools, and many of those schools take the same state assessment test as the public schools.

Public schools also have no accountability for how they spend money.  All spending decisions are made by local school boards, and legislators have no say over how money is spent.  In fact, school districts on multiple occasions have been found to not be spending money as intended, but nothing happened.

Some critics fear that private schools will recruit the best students and leave the most difficult to educate with the public schools.  First of all, there is no evidence of that in states that have had robust ESAs and tax credit scholarships in place for years.  Second, only kids below grade level and low-income students are eligible, and school districts say they are among the most difficult to educate.

This concern is something mirrored by those concerned about increasing regulation on private schools. Nothing in this bill increases regulations on private education. The voluntary aspect of these programs is also key because if a school or family did not want to take advantage of the program for fear of increased regulation they’re, of course, free to not utilize the program. Whereas the families in need of an option would have new opportunities that they currently do not.