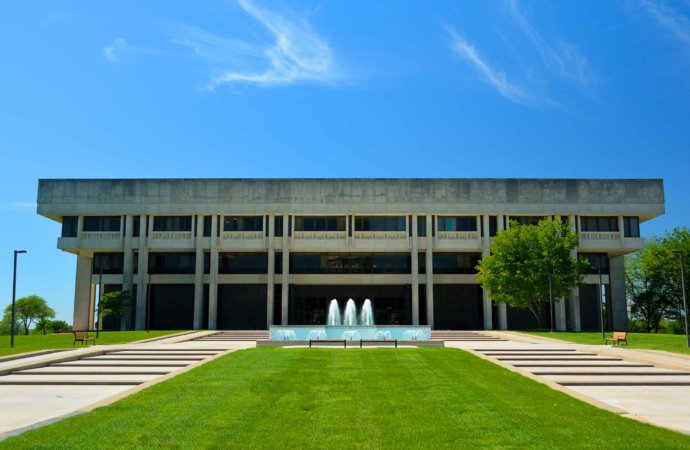 New data from the Kansas Department of Education provides more stark evidence showing the Kansas Supreme Court Gannon ruling to increase funding won’t help students.   Legislators could give more money to local school boards but they can’t make them spend it effectively or efficiently.  And that’s largely the reason that simply spending more money never has – and never will – cause achievement to improve.

When the Court ordered $853 million more in its 2005 Montoy ruling, legislators asked schools to put the vast majority of the new 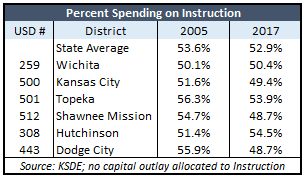 It’s noteworthy that two of the four districts suing citizens for more money (Kansas City and Dodge City) are among those allocating a smaller portion of their spending to Instruction.  Spending allocations for each district can be found here on KansasOpenGov.org.

Allocating 65 percent of spending to Instruction doesn’t guarantee better outcomes but that’s where spending will have the greatest impact.  And a little over $7 billion more would have spent on Instruction if local school boards had followed the Legislature’s wishes beginning in 2006. 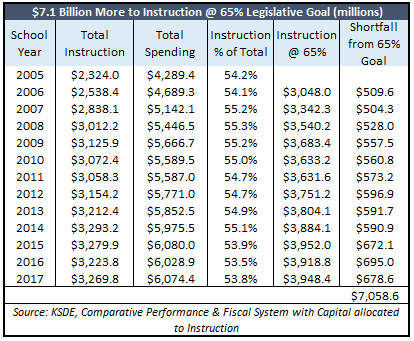 Some of the total spending increase was on debt service, and while that can’t legally be spent on Instruction, school boards that increase debt often cause state aid to be diverted to debt aid that could otherwise have been spent on Instruction.  For example, the state provided $52.2 million to support school building projects in 2005 but that number ballooned to $181 million last year; had that piece of state aid held steady, another $661 million would have been available for operating aid.  New buildings often cost more to operate, which also diverts aid that could be used for Instruction.

As tortured as some court rulings have been, the courts have never said the Legislature must provide additional funding for schools to build unlimited cash reserves or to spend more than necessary to provide services at efficient prices.  But schools districts actually choose to spend money unnecessarily; their own spending patterns reflect it and their legislative testimony confirms that they want to be able to spend more than necessary at will.  Per-pupil spending, for example, varies greatly even among districts of similar size.  Districts of all sizes spend hundreds of dollars less per-student on Administration than most of their peers, demonstrating that significant savings are possible.  Just getting every district to the median spend per-pupil for its enrollment category would save over $50 million!

Some of the variances on Instruction spending result from districts getting extra money for low income and special education students, so districts with proportionally higher ratios of those demographics will spend more per-pupil.  Transportation costs are impacted by population disbursement and a district’s land area, and Food Service costs would be affected by the ratio of students eating meals at school.  But many variances cannot be explained away by those caveats. 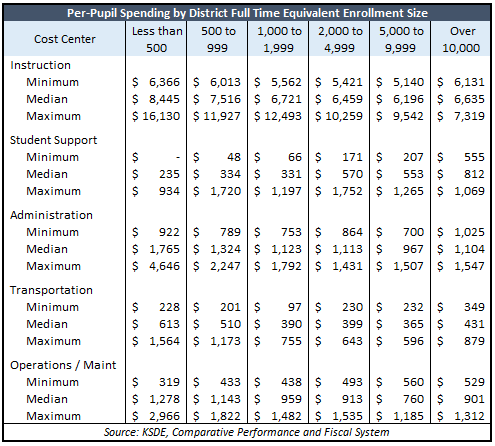 Per-pupil spending for each district can be found here at KansasOpenGov.org.

Taxpayers have pumped almost $2 billion more into public education since 2005 but achievement results on the National Assessment of Educational Progress and the ACT exams have remained stubbornly flat overall and in many people’s assessment, unacceptably low.[ii]  Even if the Legislature paid the $600 million more annually that the court demands to keep schools open, history in Kansas and across the nation says student achievement wouldn’t improve…but the economic consequence to citizens and businesses would be devastating.

[ii] State assessment scores cannot be compared over this time frame, as the Kansas Department of Education technical guidance on state assessments says performance standards have changed to the extent as to prevent valid comparisons.